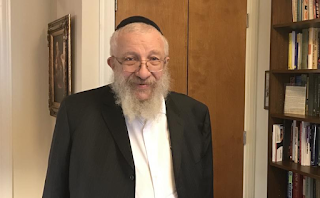 An Orthodox Jewish psychotherapist in Brooklyn is suing New York City in federal court over its ban on counseling to treat unwanted homosexual attraction or gender confusion, arguing that the law violates the First Amendment's guaranteed right to free speech.

Alliance Defending Freedom (ADF) is representing Dr. Dovid Schwartz of the Chabad Lubavitch Orthodox Jewish Community in his suit against a 2018 law prohibiting paid services that "seek to change a person's sexual orientation or seek to change a person's gender identity to conform to the sex of such individual that was recorded at birth." First, second, and repeat violations are punished by fines of $1,000, $5,000, or $10,000, respectively.

ADF says Schwartz has served numerous patients who came to him seeking the ability to experience heterosexual attraction in order to have families that conform to their religious beliefs. Schwartz treats them by simply speaking with and listening to them.

"Nearly all of Dr. Schwartz's patients share his faith, and they value his counsel about issues of sexuality and family in part because his perspective is grounded in their shared Jewish faith and respect for Torah teachings," ADF legal counsel Jeana Hallock said. "The government has no right to dictate the personal goals an adult pursues with his or her therapist."

"It is difficult to imagine a more direct violation of freedom of speech protected by the First Amendment than New York City's attempt to regulate the private sessions between an adult and his counselor," ADF senior counsel Roger Books declared. "The city council's regulation is unprecedented and threatens to stand between Dr. Schwartz's patients and the lives they choose to pursue."

In an interview with PJ Media, Hallock added that the city council is currently soliciting anonymous complains about the law's violators. Schwartz "keeps a very, very busy schedule," she said, often working as late as 11:00 p.m., and has served the community for 40 years.

Attorney Ron Coleman took to Twitter to offer his own analysis of the law, finding its censorship was "unprecedented."

Defenders of "reparative" or "conversion" therapy bans, such as Zack Ford of the left-wing ThinkProgress, claim that "every major medical organization has condemned the practice as ineffective and harmful." But many former homosexuals, such as Angel Colon and Drew Berryessa, attest to the treatments' success in improving their lives. They say they want others currently struggling with unwanted same-sex attraction to have the same options that benefited them.

"While recovering in the hospital, I had time to reflect. I learned about forgiveness. Lord, I choose you," Colon, a survivor of the Pulse Nightclub shooting, said in June at a rally for ex-homosexuals opposing a failed California ban. "I want others to have the freedom to experience this."