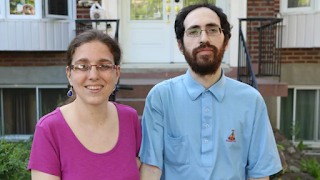 Yohanen and Shifra Lowen, former Hasidic Jews who claim the Quebec government didn't do enough to ensure they received a proper education, will finally get their day in court — a year from now.

Their lawyer, Clara Poissant-Lespérance, said its outcome will be pivotal in determining the government's obligations towards children educated in religious communities.

"The trial will give an answer to those very important questions about if the government did enough to make sure children receive a proper education," she said.

The Lowens are seeking a declaratory judgment which, if they win, would force the province to take steps to ensure children in religious communities are taught the provincial curriculum.

Named in the lawsuit are the province's Education Ministry and Hasidic schools in their home community of Tash, a secluded ultra-orthodox Hasidic community in Boisbriand, Que., about 30 kilometres from Montreal.

Representatives from the local school board, the province and youth protection services will be called to testify.
Yohanen Lowen alleges that, when he finished school at 18, he could barely add or subtract, couldn't read and write in English or in French, and was left unequipped to find work.

He broke ties with his home community a decade ago and now lives in Montreal with his wife and four children. He is unemployed and is still working toward his high school diploma.

From police raids to compromise
Quebec has struggled for years with how to deal with schools that don't comply with the provincial curriculum.

In 2016, one Montreal school that didn't follow the rules was raided by police.

The Quebec government has since reached a compromise with several schools, whereby religion is taught at school and the curriculum taught at home, under the supervision of the English Montreal School Board.

At a brief hearing Thursday at the Montreal courthouse, Quebec Superior Court Justice André Wery set aside 15 days for the trial.

Lawyers for the Quebec government present at the hearing declined to comment.