A car burnt to a crisp 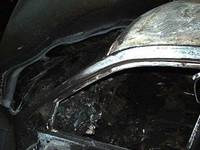 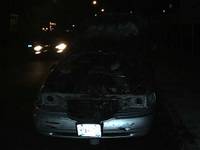 A Driver for Get-A-Car car service located in Boro-Park had his car confiscated and will have to show up in court to defend himself tomorrow for operating illegally as a car service. The driver was pulled aside after delivering a car load passengers to the airport. The man's car was then confiscated and ironically he was forced to take a taxi home.

Lipa Schmeltzer was seen making an illegal left turn in Boro-Park from New Utrecht Avenue onto 55th Street. While approaching 55th Street from the higher number Streets on New Utrecht Avenue there is a "No Turns" sign. Lipa, obviously oblivious to the sign, started beeping at the pedestrians trying to cross and proceeded to attempt a left turn. After being stopped by someone pointing to the sign, Lipa rolled down his window, looked at the man and then at the sign, exclaimed a big "OH!" and kept on driving through.

A Boro-Park man was wrongfully arrested for an alleged hit and run accident that his car was involved in. The man failed to report his Lincoln Towncar stolen right away and was later picked up by police when his car discovered to have been involved in a serious accident. The driver and alleged car thief fled the scene of the accident but did however leave a bloody trail in the car. The blood will hopefully help prove the innocence of the car owner and his noninvolvement in the crime. Shomrim have said they have a good speculation of who the thief may be.

Leave Comment ---This article posted by Chaptzem : 10:39 AM
0 comments

Mugger sentenced to one year in jail

The mugger that brutally beat a heimishe yingerman with a hatchet on a Friday night a few weeks ago was sentenced to one year behind bars. After the yingerman and others testified the District Attorney was able to prosecute the mugger. I hope, for the benefit of this City, that the prosecutor usually has better luck with putting away violent, repeat-offenders for longer amounts of time.

Leave Comment ---This article posted by Chaptzem : 1:42 AM
0 comments

HASC decided to use an elaborate videotaped advertisement to promote their concert this year.

Shabbos morning a yingerman fell off the roof of a Williamsburg building to his death. The yingerman would frequently spend time on the roof drinking coffee and taking in fresh air. This time however, according to the Medical Examiner, he lost his balance while sitting on the ledge and fell five flights where he was later discovered to be dead by Hatzalah.

A bocher learning in Ponovitcher Yeshiva in Israel killed another bocher by hitting him over the head repeatedly with a metal object. The victim had a dispute with a Mashgiach of the Yeshiva and in anger flicked off his hat. The other bocher who observed this could not hold himself back while observing this take place and instinctively beat the bocher to death.