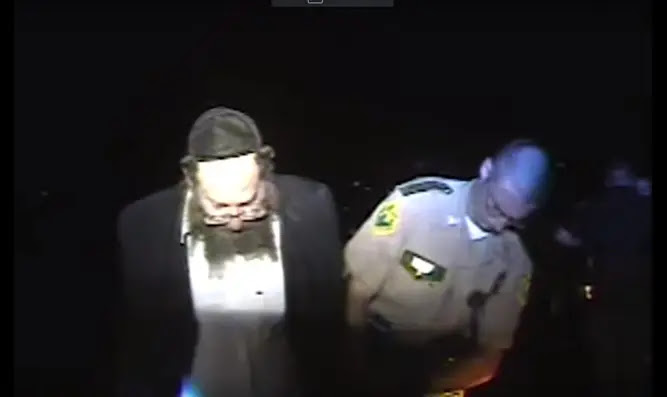 A Vermont judge cleared Rabbi Berl Fink of all charges Wednesday relating to his controversial arrest by Vermont State Troopers in August that resulted in Fink being arrested at gunpoint.
Fink had led Vermont State Trooper Justin Thompson on a four-mile police chase in August when he failed to pull over for driving 20 miles over the speed limit. Fink said that he did not realize he was being pulled over and could not find a place to do so.
When Fink finally stopped, Thompson ordered him at gunpoint to leave the car with his hands up and handcuffed Fink along with his wife and brother. Thompson told Rabbi Fink that "if you don't do exactly what I say, you're going to get tased" and yelled at another officer to "check them for weapons".
Fink was later charged with refusing a police order.
Fink's wife Sarah later told the New York Post that the ordeal was "traumatizing" and contended that police had caused them to be fearful of travel. "I tell you, there was brutality. He was pointing guns. I can't tell you how traumatizing it was," said Sarah Fink. "We were frustrated. We were helpless. There was nothing to do. When someone starts up with you, you call the police. But what if it is the police?"
"We're talking about normal people. What in the world are you doing to them? It's out of hand. This shouldn't have happened in any state in the United States of America," said Fink's son Yehuda.
Dashcam footage of the incident quickly went viral, outraging members of New York's close-knit haredi community. Many contended that the incident involved anti-Semitism and were incensed when the Vermont State Police Internal Affairs Unit cleared Thompson of misconduct, ruling that "Thompson acted in accordance with his training and Vermont State Police policy and procedure".
"My constituents' dress made it clear that they were Hasidic Jews, a sight that may be uncommon in Vermont but one that is hardly a crime," said Brooklyn Assemblyman Dov Hikind. "While it would be difficult to mistake the Fink family as people who might pose a danger to police officers, they were subjected to having guns pointed at them, being handcuffed, terrorized and humiliated. This entire incident has left the Fink family traumatized and fearful of travel."
Jim Kenyon, a columnist for Vermont's Valley News, also blasted the behavior of the police. "After watching the video of a Vermont State Police trooper's traffic stop of a Brooklyn rabbi and his family on Interstate 91 in Thetford, I don't know whether to be angry or frightened," he wrote.
"The 40-minute encounter, captured on a cruiser's dashboard video camera, shows what can go wrong when police bring a military mentality to their daily jobs."
http://www.israelnationalnews.com/News/News.aspx/236932
Leave Comment ---This article posted by Chaptzem : 10:39 AM

Big suit coming. Will be tried via jury in Brooklyn.

I think this report is mistaken.

I saw elsewhere that Fink pleaded not guilty, but not that he was cleared by the court.