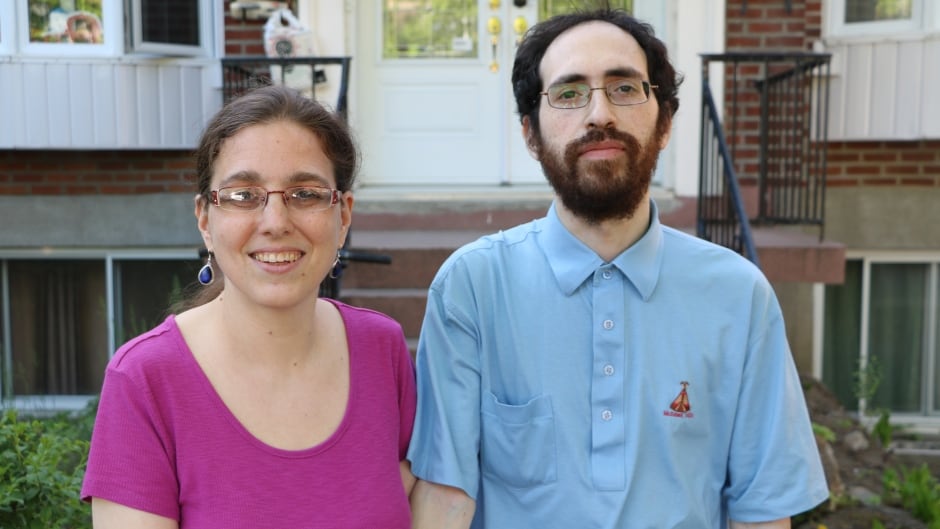 Growing up near Montreal, Yohanan Lowen was at the top of his class.

He could speak Yiddish, read ancient Aramaic and recite lengthy passages from the Talmud, the compendium of sacred Jewish texts.

But when he finished school at 18, Lowen alleges he could barely add or subtract, nor read and write in English or French. He says he hadn't even heard of the St. Lawrence River.

"We never learned the rules of a language. We never had literature. We didn't develop a rich vocabulary for writing or even for talking. I never learned French. Je ne parle pas bien en français," said Lowen, who grew up in Tash, a secluded ultra-orthodox Hasidic community tucked away in Boisbriand, Que., about 30 kilometres from Montreal.

He broke ties with his home community a decade ago.

Now unemployed and still working toward his high school diploma, the father of four is in the middle of a drawn-out legal battle against the Quebec government and his home community.

Lowen and his wife, Shifra, who also grew up in Tash, accuse the province of ignoring its legal obligation to ensure all children receive a proper education.

The case is expected to be heard next fall, and its outcome could have a profound effect on schools run by religious communities in the province.

His story is the subject of Benjamin Shingler's documentary, Birds in my head.

Quebec's Education Ministry, the community of Tash and the rabbi named in the legal challenge all declined to comment, citing the ongoing court case.

Tash is home to roughly 3,000 people considered to be among the most conservative of the Hasidic sects in Quebec.

It was founded in 1963 by 18 families who wanted a place outside Montreal where they could live in seclusion in accordance with their beliefs.

A set of bylaws, established by the head rabbi, governs the behaviour of community members.

Tash is just a few blocks — and another world — away from an A&W and a gas station. It has its own shops, schools and even its own ambulance.

"Even radio is forbidden. No cinema, no theatre, no sports, no playing except for young children."

In 2014, initial reports about Lowen's lawsuit said he and his wife were seeking $1.2 million from the government. However, Clara Poissant-Lespérance, Lowen's lawyer, said his clients don't want a payout.

Instead, they are seeking a declaratory judgment which, if they win, would force the province to take steps to ensure children in religious communities are taught the provincial curriculum.

"What we allege is that the government has a responsibility to make sure that all children follow the basic education program," she said.

Similar cases involving former Hasids are now before the courts in New York state and Israel.

In Quebec, only schools that follow the provincial curriculum are eligible for government funding.

In 2016, a Montreal school that didn't follow the rules was raided by police.

The Quebec government has since reached a compromise with several schools, whereby religion is taught at school and the curriculum taught at home, under the supervision of the English Montreal School Board (EMSB).

"For us, it seems to be an excellent solution," said Joseph Maman, head of Yeshiva Toras Moshe Academy in Montreal's Mile End neighbourhood, home to many of the city's Hasidic Jews.

"It allows the parents to offer their children their personal values, and at the same time it enables these children to get a secular education overseen by a school board — in this case, the EMSB."

Lowen has become something of a media darling in Quebec as the province wrestles with the accommodation of religious minorities.

He even appeared on the popular French-language talk show Tout le Monde en Parle a few years ago, where he criticized the government and his home community.

His comments have angered many Hasidic Jews, who say his struggles aren't representative of their own experiences.

Chesky Weise, a Hasidic Jew who lives in cosmopolitan Outremont, a Montreal suburb adjacent to Mile End, said his children's schools are trying to comply with provincial requirements.

That means long school days for his children, divided between hours of religious studies and the Quebec curriculum.

"It is a very difficult balance for us. We're always struggling with it," said Weise.

The Quebec government tried to get Lowen's case thrown out earlier this year.

A judge struck down that challenge, giving Lowen legal standing to take both the government and the rabbi in charge of his old school to court.

No matter what happens, Lowen said he's happy he started a conversation.

"People should talk about it. This itself is the first step."