Yeger, Hikind Debate Was In Back Of The Room 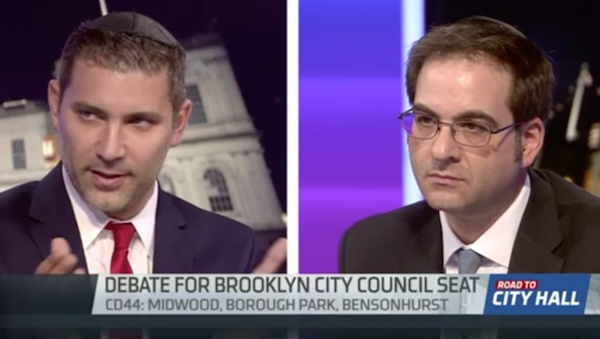 As I readied to watch the televised NY1 debate between City Council candidates Kalman Yeger and Yoni Hikind on the big screen in the front room of the Boro Park JCC on 14th Avenue, Mark Meyer Appel, an Orthodox Jewish reformer, whispered in my ear to look in the back of the room.
I turned around and saw some 20 Hasidic Orthodox boys ranging in age from about 12-18.
"This debate should be about them," Mark whispered. "These kids probably don't care so much about the debate as having an opportunity to watch TV and learn about the outside world."
A few minutes later, the NY1 moderator Errol Louis introduced the two candidates running for the open seat representing Boro Park, Bensonhurst and Midwood on the big screen. As expected, the political gladiators went at each other over experience, campaign fundraising and who's running a dirtier campaign.
Then Louis asked the candidates about Yaffed, a Hasidic and Orthodox organization that seeks reforms at a number of Brooklyn Yeshivas.  Specifically, Lewis wanted the candidates to respond to the organizations' report  that found a number of yeshivas do not meet state education standards in teaching secular education in English, science and math, and yet receive taxpayer dollars.
Yeger, a smart fellow and attorney, answered the question like a prosecutor. He discredited Yaffed as a fly-by-night, two- or three-person operation that issued a report without a shred of evidence, either real or anecdotal. He then proceeded with his own anecdotal defense of all yeshivas, saying he and his siblings all received great educations going to Hasidic Yeshivas, and went on to lead successful lives straddling the religious and secular world.
Hikind framed his answer, saying he loves the Boro Park community – secular, Hasidic, Orthodox Jewish and non-Jew alike – but as a religious Jew, he has a special affinity for what may or may not be a problem with some yeshivas.
He went on to say when a person or insular community feels attacked their natural response is to get defensive and little gets done when that happens. The solution, he said, was to get all the parties together in a safe environment where reasonable people can agree to disagree and things can get resolved.
The debate was too short to pick a clear winner or loser, but afterward when the boys in back made a beeline for the pastries, Mark again pulled me aside.
"It's a shame these boys have no safe place to go where they have televisions and computers and games, and where they can discuss and learn about the world at large without being castigated," he said, adding another young [Hasidic] kid, the son of a friend, had recently committed suicide."
As I rode my bike home through the streets of Boro Park I thought about what Mark said. And I thought about Malky Klein, the young religious woman who recently died from a heroin overdose.
I've also mulled over the growth of organizations like Yaffed and Footsteps, and the labeling of some kids as OTD (Off the Derech – Yiddish for path) – all of which stems, in part from the failure of some educators in the Hasidic world to balance the importance of teaching Talmudic ways while addressing the modern world and larger community in which we live.
I won't even pretend to know where all this will lead. But I do know one thing. Burying your head in the sand will not make this escalating problem go away. It will only exasperate it.
http://www.kingscountypolitics.com/yeger-hikind-debate-concerned-back-room/
Leave Comment ---This article posted by Chaptzem : 9:45 AM