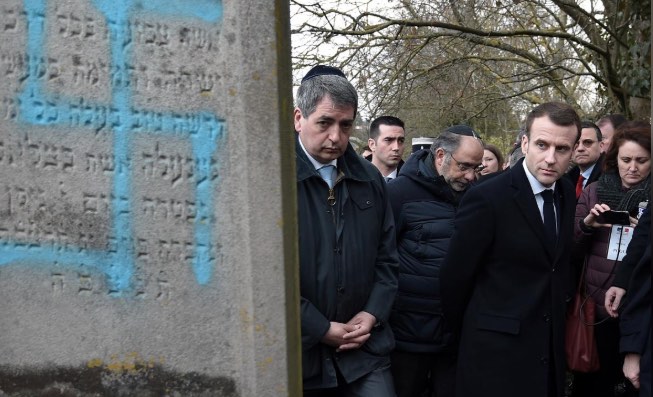 On Wednesday, the TV network France 3 was forced to cut off a live Facebook broadcast from a desecrated Jewish cemetery in eastern France when trolls swarmed the feed and filled it with anti-Semitic hate comments.

You could say there's a problem with anti-Semitism in France.

The night before on Tuesday evening, roughly 20,000 people and lawmakers from across the political spectrum gathered to denounce anti-Jewish hate at the Place de la Republique in central Paris. Other protests were held throughout France.

France 3 said it went live from the cemetery in the village of Quatzenheim on Tuesday as President Emmanuel Macron was visiting to pay his respects after more than 90 graves were vandalized with swastikas and anti-Semitic abuse.

But as it broadcast footage online to its more than 1.3 million Facebook followers, the feed was inundated with anti-Semitic commentary and abuse.

“We are talking about explicit death threats, comments that were openly anti-Semitic and racist, including “Heil Hitler”, “dirty Jew” or “dirty Jews”, comments that were addressed at Emmanuel Macron and representatives of the Jewish community,” the channel said in a statement explaining its decision.

“Within minutes, the number of vile and illegal comments had gone well beyond our capacity to moderate them,” it explained, adding that it would have taken 10 or 20 staff to handle the onslaught. “We refuse to traffic in hatred.”

The cemetery attack is only the latest hate crime in France in recent weeks.

Macron spoke to members of the local community at the cemetery, and promised a tough response.

“Whoever did this is not worthy of the French republic and will be punished,” he said. “We’ll take action, we’ll apply the law and we’ll punish them.”