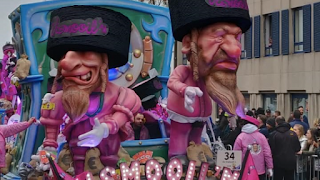 A carnival parade in the city of Aalst, in Belgium's Flemish region, has come under criticism for offensive costumes and displays – and not for the first time. The parade on Sunday, March 3, featured people dressed in Ku Klux Klan costumes, people in blackface, and one float with huge models of stereotypically Jewish figures.

It was this last float that fuelled the most outrage. Videos and pictures of it circulated on social media and YouTube. The float is fronted by two giant models in pink suits, wearing sidelocks and shtreimels – a fur hat traditionally worn by Hasidic Jews – and with large, hooked noses. One of them has a rat on his shoulder. Both are standing on piles of gold coins and are surrounded by bags of money.

The Coordinating Committee of Belgian Jewish Organisations in Belgium (CCOJB) and the Forum of Jewish Organisations (FJO) said in a statement, "At best, this shows a reprehensible lack of judgment, especially given the context of rising anti-Semitism in our country and in the world, at worst this is a reproduction of the worst anti-Semitic caricatures of the Nazi era".

A spokesperson from the European Commission called it "unthinkable" that anti-Semitic imagery was featured in the parade 70 years after the Holocaust.

However, the town's mayor, Christoph D'Haese, published an op-ed in Dutch media HLN defending the parade. He railed against any "censorship" of the festival, and said that those who participated in the parade should not be "lumped in with anti-Semites".

Local media reported that the leader of the far-right party Forza Ninove, Guy D'haeseleer, posed next to participants dressed up as Ku Klux Klansmen, drawing further condemnation from anti-discrimination associations.

The annual parade in Aalst is no stranger to controversy: in 2013 it was roundly condemned for a float with people dressed as Nazi SS officers. UNESCO recognised the Aalst carnival as an example of intangible cultural heritage in 2010, but waded into the furore three years later to condemn the costumes. Those who took part justified the float by saying it was meant to be a jab at the Flemish rightwing nationalist party the New Flemish Alliance.