The picture of the Belzer Rebbe sent to the Nazi 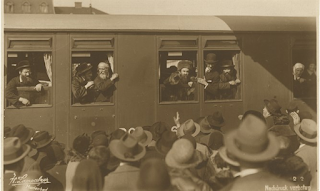 Recently, a German postcard was revealed with a photograph of the Belzer Rebbe bidding goodbye to his followers at the time of the Holocaust.

The postcard, photographed by a German photographer in Marienbad, was sent to a soldier in the Nazi German army after the outbreak of World War II. The postcard will be available for sale this month at the Kedem auction house in Jerusalem.
On the back of the postcard, there is a short typewritten text with a handwritten signature. "Allow me to send you warm greetings from Marienbad ..."

The postcard bears a Nazi postmark from Marienbad which incorporates two swastikas and a stamp of the German Reich. The postcard is addressed to Hauptmann Grube, a soldier in the Nazi German army, and was sent to the Air Force headquarters - Fliegerhorstkommandantur - in the fall of 1939.

The photo was taken by Hans Lampalzer, a German photographer in Marienbad who regularly photographed rabbis and hasidic Rebbes who lived in or visited his town. The image of the Belzer Rebbe at the railway station in Marienbad became known through a number of postcards with pictures taken by Lampalzer. The postcard - which is an extremely rare find - shows two women in the second window of the train car, probably relatives of the Rebbe.

The Rebbe, Rabbi Aharon Rokeach of Belz, (1880 - 1957) was one of the greatest Rebbes and Jewish leaders in Europe before the Holocaust. He was coined "Aharon the Holy One" since he was known for his great holiness and his toil in Torah and hasidism. He was extremely ascetic - eating very little and barely sleeping. Thousands of Jews flocked to his home for blessings, advice and assistance.

In 1926, he was crowned as the Rebbe of Belz Hasidism and became one of the leading leaders of haredi Judaism in Eastern Europe. During the Holocaust, he was persecuted by the Nazis who pursued him as one of the leaders of world Judaism. His hasidim hid him and smuggled him from ghetto to ghetto, until he was miraculously smuggled into Budapest, Hungary. He stayed there for a short period of time and eventually was smuggled into Israel on a grueling journey through Romania, Bulgaria, Greece, Turkey and Syria. He arrived in Israel alone - bereft of his entire family. His wife, children and grandchildren were all killed by the Nazis.

Upon his arrival in Israel, the Rebbe settled in Tel Aviv, where he was active in encouraging refugees and Holocaust survivors. He and his brother, the Bilogoria Rebbe, established the Belz Hasidic institutions in Israel and abroad - in Tel Aviv, Jerusalem, Bnei Brak and other cities