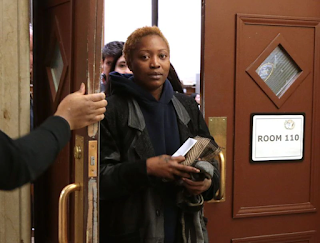 A woman who was busted twice on assault charges, and sprung from jail both times under the state's new bail law, couldn't make her Brooklyn Supreme Court arraignment Wednesday because she's still under psychiatric evaluation, her lawyer said.
Tiffany Harris, 30, was committed to a hospital on Jan. 2 on another judge's orders after allegedly missing a date with social workers.
"She is still hospitalized. She was hospitalized on Jan. 2," Brooklyn Defender Services lawyer Danielle Regis told Judge Danny Chun on Wednesday.
Harris was set to be arraigned on an upgraded indictment of felony hate crime charges, for allegedly attacking three Hasidic women on Eastern Parkway outside Chabad Lubavitch headquarters in Crown Heights on Dec. 27, then two days later punching a 35-year-old woman in Prospect Heights in an apparently unprovoked attack.
A Brooklyn judge freed Harris without bail after the Prospect Heights incident because she was only charged with misdemeanor assault.
The de Blasio administration stepped into the prosecution at a certain point, with City Hall reportedly urging a Brooklyn judge to have Harris held for a mental health evaluation.
Harris is due back in court on Feb. 19.
https://www.nydailynews.com/new-york/nyc-crime/ny-tiffany-harris-hate-crime-court-date-20200122-k2wwlezgz5et5dlsrct766b5xa-story.html
Leave Comment ---This article posted by Chaptzem : 9:33 AM