Kosher Pizza and Wild Oats in the Catskills 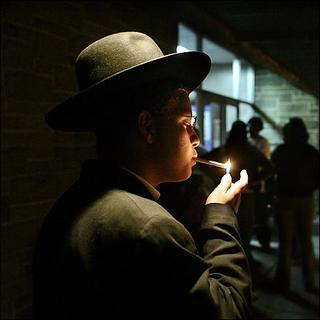 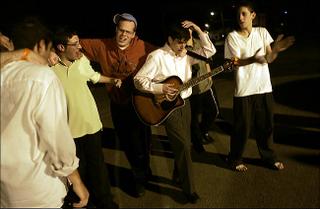 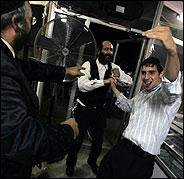 The streets of Woodbourne are ghostly, clerks at ShopRite outnumber shoppers two to one, and the Kiamesha Lanes bowling alley is so quiet you can hear a pin drop. It is a Catskill Saturday night at 10 o'clock, and everyone - at least everyone observing the Jewish Sabbath - knows where their children are.

An hour from now, however, and all bets will be off.

With the sun safely beneath the horizon, Yudi Kaufman and Yoel Hillelsohn put on their long-sleeve Oxford shirts, jumped into Mr. Kaufman's Toyota Scion and cranked up the Yeshiva Boys Choir. By midnight, having picked up three friends at far-flung bungalow colonies, they headed to Wal-Mart in Monticello, its parking lot already crammed with baby carriages, camp vans and packs of teenagers practicing blowing smoke rings in the amber glare of the overhead lights. For many people, however, shopping was not on the agenda.

"This is the place to be," said Mr. Kaufman, 19, as he and his friends languidly roamed the aisles looking for familiar faces, the fringes of each one's tallit, a garment signifying religious devotion, dangling at his hips. "Everyone who's anyone is up in the mountains, and at some point, they're coming through Wal-Mart."

As if on cue, a boisterous man came bounding past the shoe section and leapt into Mr. Kaufman's arms. "Dude, there are so many Jews here," shouted the man, Ari Dicker, 20, a long-lost yeshiva friend from Queens. "This place rocks."

Gone are the days when Catskill entertainment was anchored by mambo night at Grossinger's, ribald comedians at the Concord and Singapore sling-fueled evenings of wagering at Monticello Raceway.

These days, the Sullivan County summer crowd is decidedly less secular and more committed to wholesome diversions that revolve around eating, late-night shopping and, for the bold and nonconformist, flirting.

The hell-raisers tip vodka into their cans of Mountain Dew or hijack Wal-Mart's electric scooters for the handicapped and race up and down the aisles at 3 a.m. But for most young men and women old enough to drive and too young to be married off, the troika of amusements are kosher pizza, people-watching at Wal-Mart and bowling at Kiamesha Lanes, in no particular order. The one-horse town of Woodbourne, with bookstore, video-game room and kosher Chinese restaurant, is another hot spot.

At the region's growing number of yeshivas, young Hasidic men spend the week deep in Talmudic study. At the sleepaway camps, counselors are kept busy with their young charges. And from sundown Friday to sundown Saturday, the Jewish Sabbath keeps everyone tethered to their homes. By Saturday night, everyone is yearning for diversion.

"We're just chilling," said Moshe Fish, a 24-year-old yeshiva student wearing distinctive Hasidic black-and-white attire. After finishing off ice cream cones at Fialkoff's in Monticello, he and his friends sat outside the doorway and laughed as a dozen women tried to squeeze into a minivan. "This is the only night we can stay up late."

By midnight, Route 42, the twisting link between Monticello and a string of outlying towns, is teeming with hitchhikers, taxicabs and packed minivans borrowed from trusting fathers. The Yellow Cab Company's 16 cars race from camp to bungalow colony, trying to keep up with the backlog of calls.

For many observant Jews approaching their 20's, some of whom share rented houses and take jobs as lifeguards or store clerks, summer in the mountains is a chance to explore the outside world away from the gaze of parents and rabbis. "All of us are out here enjoying our teenage years," said Matis Adar, an 18-year-old from Brooklyn who spent July and August working at a kosher supermarket. "We're just letting it all out before we have to be adults."

Among those whose families hew to the tradition of arranged marriage, the adolescent waltz between girl and boy can be a complicated dance. Casual dating is forbidden, and even eating falafel at Shwarma King with an unrelated person of the opposite sex is frowned upon. (Such is the reach of the religious authorities that people under 25 are not supposed to drive in the mountains. After a series of deadly accidents involving young people, the rabbis say the roads, are far too perilous.)

At 20, Mr. Hillelsohn is nearing the age when his mother's friends come needling with prospective brides. "If you're looking for women out here, it's easy," he said disapprovingly. "I'm not." The fact that Estee Buchsbaul, a 17-year-old friend of a friend, was tagging along as they wandered through Wal-Mart made him uncomfortable. When a photographer took a picture with Ms. Buchsbaul at his side, Mr. Hillelsohn asked that the image be quashed. "No," Estee said teasingly. "Put it in the paper."

By 4 a.m., the lights at Kiamesha Lanes were turned up and the manager began coaxing the stubborn out the door. A group of young men, their ardor fueled by Heineken, sang and danced around the parking lot as Jewish music blared from the open window of a car. One man tried to play the guitar while hopping on one foot, strangers were dragged into a chaotic conga line, and Isaac Waldman, 19, giddy with a few too many, fell to the ground laughing.

"This is the life," he said, standing up and leaning heavily on a friend's shoulder. "We'll never have this much fun again."

Comments:
All you idiots mentioned here-Thanks for being mvazeh sheim shomayim

Anonymous : September 02, 2005 12:00 PM
OY VEY!!! Imegin dot. The heimishe boyes vant to hev some fun.
No shidduchim for them ,their sisters,brothers and even their cousins.

Anonymous : September 02, 2005 3:19 PM
at first glance, the article looks like a Chillul Hashem, yes. The picture of a young kid lighting up doesn't help. The truth is, though, that outside of our own frum world, it's nothing more than an amusing anecdote about young people having fun within the boundaries of their religion, and is quite tame, innocent and -in my humble opinion- sweet.