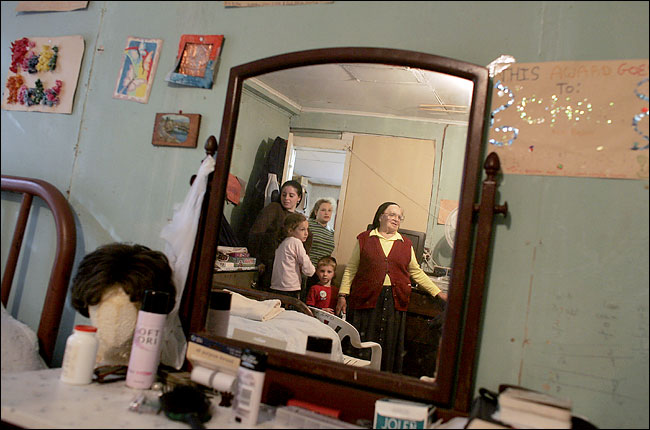 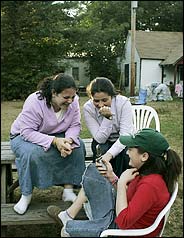 It doesn't take much to get the circle up and running. Every morning, shortly after the children have been mercifully spirited away to day camp, Deborah Goldman or Bonnie Keller or perhaps Agi Gruenbaum will drag a rickety folding chair to the shade of the giant white pine, pull out her latest embroidery project and before long, the circle - a jagged amoeba is more like it - will come to life with a dozen or more women who make Ganz Bungalows their summer home.

To the accompaniment of buzzing cicadas, they vigorously hash over the latest news from Israel, discuss upcoming weddings and embellish details from the previous evening's skunk sighting. When the skies deliver rain, they shift closer to the sheltering boughs of that great pine and hope for the best.

Men are welcome, but rarely linger. Children dip in and out of the circle, but only to show off a captured salamander or receive comfort for a bruised knee. "This is our Shangri-La," said Mrs. Goldman, glancing around at a moldering jumble of paint-deprived structures that house 40 families, many of whom have been coming here for decades. "If the bungalows were any nicer, we'd spend more time inside. That would not be a good thing."

In the age of the $100 air-conditioner, discount jet travel and second-home subdivisions, scores of bungalow colonies like Ganz hang on to their lazy, low-tech ways, the rhythm of life unchanged since Jewish dairy farmers, desperate for extra cash, first began building flimsy cabins on their pastures in the 1920's. For the multitudes of New Yorkers who once spent their summers in the Catskills, the bungalow colony is a thing of a past era, a sugar-sweet memory brought to life by a grandparent's recollection, or by films like "A Walk on the Moon," which captured the richness and claustrophobia of colony life in the late 1960's.

But those who have not traveled lately up the Quickway, as locals once called Route 17, might be stunned to learn that bungalow colony life has not vanished. In fact, it has rebounded from its abandonment in the 1970's and 80's and flourished with an influx of religious Jews from New York City and its suburbs. Although many familiar places have crumbled into the earth and others have been reborn as $300,000 winterized vacation homes, more than 250 old-school colonies remain in Sullivan and Ulster Counties, according Herb Fishman, who runs an owners' association. "If anything, the number of people coming to the bungalows is growing," he said.

They range from the tiny Pleasant Valley colony, two opposing rows of 32 attached cottages, to the ever-expanding Satmar community of Ichud, home to more than 300 families. There are colonies catering to Ukrainians, Pentecostal Christians and recovering drug addicts, but anyone traveling the back roads of Fallsburg, Bethel or Thompson is likely to know that the vast majority have become the summer refuge of devout Jews, especially Hasidim from Brooklyn, who are drawn to the country by the same things that lured millions of secular Jews before them: untainted air, open space for their children and an intense, almost communal social life that appeals to women who often spend the weekdays without their husbands. And with two-bedroom bungalows renting for as little as $2,500 for the summer, the price isn't too shabby either (although the quality of the accommodations is another matter).

"Up here our kids live outdoors, they turn brown from the sun and we get to watch them grow up and interact with other kids in a way that's not possible in Brooklyn," said Chaya Ruchie Mayer, 35, an English teacher who spends the summer at Nachla Emunah, a Hasidic colony in Monticello. "As for the women, we baby-sit for each other, pray together, eat together and laugh our way through the night until we're giddy with exhaustion."

While a growing number of the bungalow colonies have gone co-op, providing their owners incentive to renovate, a majority remain rentals, their interiors unchanged since the days when Danny Kaye and Jerry Lewis were considered local talent.

For residents of Ganz, 10 minutes outside the Town of Liberty, in Sullivan County, the ridiculously sagging floors and extremely close quarters have become a source of humor. With a mix of pride and resignation, Rivki Lieberman, 24, offered a tour of her family's tumbledown quarters, its two bedrooms crammed with sloping beds, dressers with mismatched knobs and a shower whose faucets are operated by a pair of pliers. "If someone uses a hair dryer on Friday night, every bungalow's lights blink like a disco," she said. "I have to sleep in a bed with my two kids. Someone's always ending up on the floor. But you know what? I love it here."

Bungalow N-11, home to four generations, has been in Ms. Lieberman's family for decades, and its walls bear witness to a great many summers past. Spin art, paint-by-number Disney characters and handmade camp awards, now water-stained and faded, celebrate the achievements of children who have long since become parents. "People think this is a dump, but my friends who live in air-conditioned houses are bored," she said. "They don't have what we have here."

The weekly constants at Ganz include Sunday barbecues, Sabbath lunches and Tuesday-night children's movies at the social hall, an old dairy barn that doubles as the synagogue. Three times a day, the husbands go there to pray (if they can gather the required minimum of 10 men). The lower level, a rough-hewn space where cows once slept, is given over to day camp activities overseen by teenage counselors. The grounds, an obstacle course of tricycles, balls and strollers, includes an unheated pool, a few swing sets and a splintered paddle ball wall that also holds a basket for shooting hoops.

One other constant is the Ganz family, which has been running the place for three generations. Like his father before him, Eugene Ganz delivers the mail, collects the rent and runs from leaky roof to clogged toilet, cheery but bedraggled as he and his son, Jay, cope with a never-ending cascade of repairs. Mr. Ganz, 78, recalls the pre-bungalow days, when guests stayed in the Ganz residence and he had to sleep in the hayloft when his room was needed. "We had one toilet, and when it got clogged, you went in the woods," he said.

Decidedly nonreligious, the Ganzes have adapted well to their changing clientele, staying idle during the Sabbath and springing into action when it ends on Saturdays after sundown, at which time the repair calls invariably pour in. "The crowd has its advantages and disadvantages," said Jay, 49, who charts the colony's gradual move to orthodoxy by the appearance of more skullcaps.

The Ganzes may not attend services, but they are clearly part of the social fabric. Eugene Ganz's wife, Lorraine, showers her tenants with birthday cards and wedding gifts, and Miriam Katz, a 25-year colony veteran, puts a steaming challah into Mr. Ganz's hands every Friday. On Saturday afternoons, the Ganzes leave the car at home and walk the few hundred yards to join the residents for Sabbath lunch. "I know we make him crazy but I like to think he misses us during the winter," Mrs. Katz said of Mr. Ganz.

As August gives way to September, the families begin to trickle back to Flatbush, Passaic and the Lower East Side, prompting weepy goodbyes and leaving others the contents of their refrigerators.

After 31 years summering at Ganz, Bonnie Keller has learned that it's better to leave sooner than later. The last ones to go must endure so many send-offs, she said, and the inevitable silence that follows. "But just as bad," she added, "is that you end up with a supermarket worth of pickles, mustard and milk."