Mile 11: Where Things Get Quiet in the Hasidic Neighborhoods of Williamsburg 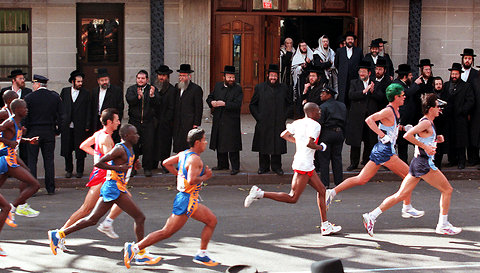 Remember the roar of the crowd at the end of Fourth Avenue? Those spectators on Lafayette who may have sweetly fibbed when they said you looked awesome?

Well, there’s not much of that during Mile 11, which passes through the Hasidic Jewish enclave of Williamsburg. For one fascinating stretch, the joggler will joggle in relative silence.

The majority of Williamsburg’s Hasidic residents belong to the Satmar sect, whose members came here from Romania and Hungary after World War II. This is an insular and complex community, one that speaks Yiddish, wears traditional dress and shuns many aspects of modern life (notice how the bicycle lane abruptly ends at Park Avenue).

My Times colleague Liz Robbins, who wrote the book on the marathon, “A Race Like No Other: 26.2 Miles Through the Streets of New York” (Harper, 2008), calls this chapter “A Modest Mile.”

The marathon, Robbins writes, runs “counter to the Hasidic community’s strict interpretation of the commandment of tznuit, modesty.” So when the runners reach this stretch, “they are met with silence, interrupted only by the rustling of the fall leaves on the street or the muted sounds of small hands clapping. The runners see stares ­– quizzical, blank or bored — or they see people look away in modesty.”

The sight of thousands of runners in shorts or skin-tights traipsing through such a traditional neighborhood, as men go about their regular Sunday business (Sabbath was Saturday) and women walk with their children and strollers, is unforgettable and so totally Brooklyn.

It is also fleeting. After crossing the aptly named Division Avenue, Bedford slants to the right, putting the ramp to the Williamsburg Bridge into view. The look of the bystanders changes.

At Broadway, and a block to the right, is the beautiful dome atop the original Williamsburgh Savings Bank building, finished in 1875 and currently shrouded in construction scaffolding (Peter Luger Steakhouse is across the street).

Back at the corner of Bedford and Broadway is the Williamsburg Art & Historical Center. Even though it is housed in an 1867 building, this heart of the local art scene is a sure sign that we are back in the New World.