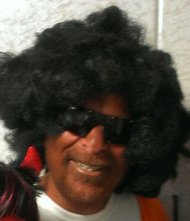 A state assemblyman apologized on Monday for donning blackface and wearing an Afro wig at a party celebrating the Jewish holiday of Purim, a costume that drew criticism from fellow lawmakers and the Anti-Defamation League bias monitoring group.
Democratic Assemblyman Dov Hikind of New York City, who had earlier defended the costume on his blog, said he did not mean to offend anyone with the outfit, which also included black sunglasses and an orange jersey.
"It was not meant to offend anybody, it was not meant to hurt anybody. I'm sorry that anyone was," Hikind said in an impromptu news conference, a video of which was posted on the New York Post website.
The costume, which he wore at a party at his home on Sunday, had drawn criticism from the Anti Defamation League, which said that he had "showed terrible judgment," according to the New York Times.
Assemblyman Karim Camara, the chairman of the New York State Black, Puerto Rican, Hispanic and Asian Legislative Caucus, said he hoped Hikind could recognize the painful history behind blackface.
Blackface was often used in minstrel shows in the 19th and early 20th centuries featuring white performers portraying African Americans, often in a degrading manner.
"A lot of black leaders and clergy - elected officials, everyday citizens - were very upset or offended, and had a lot of questions as to, from their point of view, how could someone be so insensitive," Camara was quoted by the New York Times as saying.
Hikind had earlier defended the costume on his blog, saying the objections amounted to "political correctness to the absurd."
http://www.torontosun.com/2013/02/26/blackface-apology-new-york-assemblyman-apologizes-for-blackface-party-costume
Leave Comment ---This article posted by Chaptzem : 9:53 AM