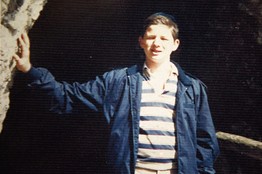 Almost 27 years have passed since Chaim Weiss, a 15-year-old rabbinical student, was found stabbed to death in his dormitory room at an Orthodox Jewish high school on Long Island.
Now, Nassau County Police are again appealing to the Orthodox Jewish community for any clues in a mystery whose solution has eluded authorities since the boy's death on Halloween night in 1986.
"There's someone out there that has a secret that can let us know, or give us a piece of what's known out there," said Det. Lt. John Azzata, the commander of the Nassau police's homicide squad.
On Tuesday, Nassau police increased the reward for information on the case to $25,000 from $5,000.
The boy's father also urged former students, teachers and staff of the Mesivta of Long Beach Torah High School to come forward with any information they had been keeping secret.
"It has been over 26 years since our son was murdered," Anton Weiss said at a news conference. "His friends, schoolmates and classmates by now are married, are parents on their own."
But police acknowledged their probe may have to overcome a reluctance by some members of the Orthodox Jewish community to cooperate because they feel they must adhere to a high standard of proof under Jewish law before leveling any accusation of wrongdoing.
"We are sensitive to and respect that belief," said Nassau's chief of detectives, John R. Capece. "However, a homicide has occurred and we need any information that can help us solve this case and bring justice and peace to the Weiss family."
At a news conference Tuesday, police said they had reopened the Weiss murder as part of a regular review of unsolved crimes.
Rabbi Ozer Glickman, who teaches at Yeshiva University's Rabbi Isaac Elchanan Theological Seminary, said: "Jewish law has a very high standard of proof," but said that secular law trumps religious law in such matters.
"That would be equivalent of judging by Shariah law today, and we don't live under Shariah law and we don't live under Talmudic law," he said.
Police also may have to contend with the Orthodox Jewish community's historical distrust of secular authorities, said Rabbi Shmuel Goldin, president of the Rabbinical Council of America.
"We lived in many countries where there was persecution of the Jewish people," he said. "And the idea of handing someone over to the authorities was something that was very frowned upon, because they wouldn't get a fair trial, they wouldn't get treated appropriately."
But the rabbi urged members of his faith to come forward with any information about the Weiss case. "We live in a wonderful country where the rule of law is the operative principle," he said.
Rabbi Glickman said that in ancient times, Jewish law required a minimum of two witnesses in order to level an accusation, but in modern times, Jewish law holds that criminal cases are to be addressed by secular authorities.
Police said the killer left clues indicating he or she was versed in Orthodox Jewish tradition.
Authorities said they believe a window left open in the dorm room was a sign the killer knew that some Orthodox Jews believe in clearing a path for the soul to escape the room.
Police said, however, that the killer could have simply studied the traditions in an effort to fool investigators. "I'm not going to just narrow the investigation to inside that yeshiva," Lt. Azzata said.
http://online.wsj.com/article/SB10001424127887324310104578511312204870262.html
Leave Comment ---This article posted by Chaptzem : 8:43 AM