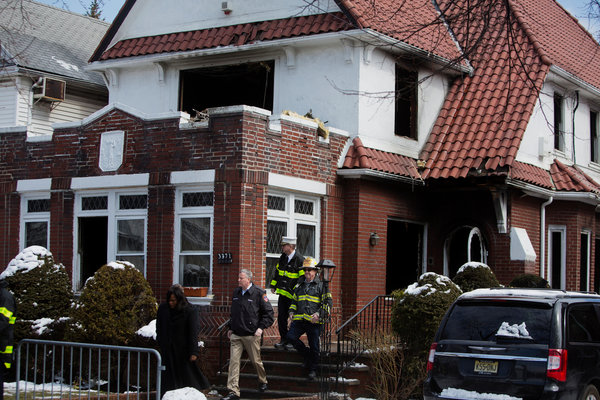 A hot plate warmed food in the darkened kitchen in Brooklyn, allowing an Orthodox Jewish mother to feed her family while observing the Sabbath prohibition on lighting a flame. Upstairs, she and eight children slept.

That small convenience led to the city’s deadliest fire in eight years, after flames that began in the kitchen ripped through the home, trapping seven children ages 5 to 16 in their bedrooms, as their mother and a 15-year-old sister, cloaked in thick smoke, jumped out of second-floor windows. They were the only two survivors.

The authorities attributed the fire to an unknown malfunction in the electric hot plate, a device often used by observant Jewish families to keep food warm from sundown Friday, the start of the Sabbath, until its end on Saturday night. Mayor Bill de Blasio arrived in the early afternoon on Saturday and walked inside the shell of the house with firefighters. “You can literally see what was a home for a large, strong family and now it’s wiped out, every room empty, burned and charred,” he said, adding: “This is a tragedy that has very few examples to look at, it’s so painful, it’s so difficult.”

On Saturday, investigators found a smoke detector in the basement of the home at 3371 Bedford Avenue, near Avenue L, but had not found any on the first floor, where the fire started, or the second, where the family slept. They were still searching the debris.

“We believe there were none,” Fire Commissioner Daniel A. Nigro said. “That’s always a tragedy in itself.”

Just after midnight, flames began to fly off the large hot plate on a first-floor kitchen counter, near the back of the home in the Midwood section of Brooklyn, a neighborhood with many large Orthodox families. On a day of rest, it would have been one of the few electrical appliances in the neighborhood that were flipped on.

In upstairs bedrooms connected to the kitchen by an open stairwell, the Sassoon family slept: their mother, Gayle Sassoon, 45; four girls: Eliane, 16; Siporah, 15; Rivkah, 11; and Sara, 6; and four boys: David, 12; Yeshua, 10; Moshe, 8; and Yaakob, 5. Their father was at a conference, and given the Sabbath prohibition on electronic communication, he did not learn what had happened until several hours after the fire, when the Police Department reached him at a synagogue.

For some time, the fire smoldered in the kitchen unnoticed, fire officials believe. But as soon as the blaze reached the stairwell, it shot upstairs, feeding off wood inside the home, the authorities said.

The stairwell became a pillar of flames. Four children in two bedrooms in the back of the house were confined to their rooms as thick smoke filled the home. Three more children were stuck in a front bedroom.

Gayle Sassoon was separated from her children by the flames, Mr. Nigro said. After jumping from the second floor, Ms. Sassoon stumbled to a neighbor’s door, but could do little more than knock and ask for help. Siporah Sassoon, her second-oldest child, also jumped out, but her seven siblings were trapped behind, wailing from the bedrooms.

“She valiantly tried, although she was badly burned, to get out and get help,” Mr. Nigro said of Ms. Sassoon. “She was very brave.”

Andrew Rosenblatt, 65, who lives behind their house, heard a girl yell from outside: “Mommy, Mommy, help me!” From inside, he said, he heard muffled screams.

Flames shot out of the second floor windows, and the smoke grew so thick that Mr. Rosenblatt said he could no longer see the back of the Sassoon home, about 40 feet away. He and several other neighbors called 911.

Before Mr. Rosenblatt had gotten off the phone, fire engines were screeching up to the home. By then, flames eating through the first floor forced the firefighters to spray water on the blaze before they could enter. The stairwell was still barely navigable when they charged inside.

Firefighters fought through the flames and found the children in their bedrooms and grabbed them, passing them through windows to colleagues who were on ladders and on a porch behind the house.

“They took them out every which way,” said James Long, a fire department spokesman.

The firefighters started resuscitation efforts as they rushed the children, some of them badly burned, to waiting ambulances. They were carried through the yard where Isaac Apton, 18, a neighbor, said they had been building snowmen this winter, and onto the street where they liked riding their bikes. On the Sabbath after sundown, Mr. Apton said, they played games of wooden blocks with each other before their early bedtimes.

“They’re some of the nicest, most well-behaved kids,” he said. “A great family.”

They were taken to various hospitals but seven could not be saved. Gayle and Siporah Sassoon both sustained burns and smoke inhalation, and were in critical condition on Saturday. Gayle Sassoon was at Jacobi Medical Center in the Bronx, which has a hyperbaric oxygen chamber for burn victims. Siporah was at Staten Island University Hospital North.

The fire was the city’s deadliest since March 2007, when nine children and a woman from two families were killed in the Bronx. That blaze started in a cord attached to a space heater, then raced up a staircase in a 100-year-old wooden building.

The fire, the leaps to safety and the unsuccessful rescues cast anguish over a Brooklyn block still flecked with the previous day’s snow. A large, square, charred hole gaped from the front of the light-colored, red-roofed house.

On Saturday morning, many neighborhood residents had not yet heard the news because they had turned off their phones, televisions and computers the night before in observance of the Sabbath.

A neighbor who gave only her first name, Bonnie, said the mother, a beautiful and popular girl in high school, had married in 1998 and moved to Israel, and that her husband worked in banking. She had moved back to Brooklyn about two years ago to be closer to her large extended family of Syrian Jews in Midwood, Bonnie, 40, said. Ms. Sassoon lived in the house she grew up in, which is still owned by her family.

Mr. Long, the fire department spokesman, said that at a minimum, homes are typically required to have a smoke detector on every floor as well as outside areas where people sleep.

“They’re beautiful homes on this block but god forbid you have a fire,” said Mr. Latish, the neighbor.

Having loosely known the family for a long time, Mr. Latish said he considered them kind, close and observant. Even the youngsters dressed the part.

At the home of Ms. Sassoon’s parents in the Syrian Jewish enclave of Deal, N.J., a man who described himself as a family friend said only: “They are going through a very tough time right now.” A woman outside the Midwood synagogue, Congregation Keter Torah, that the family regularly attended said the congregation was in pain and asked for privacy.

At Jacobi Medical Center, where Ms. Sassoon had been taken, exceptions were being made Saturday to the Sabbath restrictions on cellphone use. A rabbi chaplain was giving a volunteer an order that included kosher food to be delivered to the hospital: bananas, cake, challah bread, gefilte fish, salad, Diet Coke, spoons and forks.

Heather, a first cousin of Ms. Sassoon, took a car to the Bronx in her pajamas and was in the family waiting area on the second floor at Jacobi Medical Center. She did not want to give her last name because of concerns she would offend religious sensibilities about modesty and privacy. “I saw it on the news,” she said. “It was the house I used to go to every day. I saw the address, I almost fainted.”

She called her cousin “a religious, good girl,” a who “gives everybody strength.” The children, she said, sometimes wore matching outfits and were well-behaved “little angels.” Learning that her cousin would likely live was a relief, but raised another troubling question.

“How’s she going to cope?” Heather mused. “How on earth?”