A Glimpse Inside the Hidden World of Hasidic Women 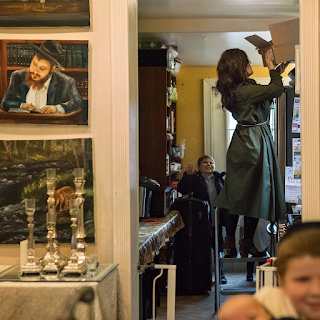 Sharon Pulwer was lost in Williamsburg, Brooklyn, shortly after moving here from Israel to study photography, when she came across the black hats and modest clothes of religious Jews in New York City. A secular Jew, she was momentarily taken aback. "I was very surprised that there was this very vivid part of Jewish life here that I was not aware about."

Ms. Pulwer, now 24, had stumbled upon members of Chabad-Lubavitch, Orthodox Jews who follow the teachings of Menachem  M. Schneerson, the group's charismatic rabbi, who died in 1994. As she learned more, Ms. Pulwer became intrigued by the community's adherence to biblical precepts that strictly delimit the roles of men and women. For a man, the highest calling is a life of scholarly study of religious text; for a woman, it is devotion to the faith, the family and the home.

"I am a Jewish woman myself, and I had the same questions about femininity and Judaism, and a woman's place in a Jewish world," Ms. Pulwer said. Eager to learn, she approached a group outside 770 Eastern Parkway, unaware it was the world headquarters of the movement, and was surprised to find herself welcomed in as an observer.

As Ms. Pulwer and her camera moved deeper into the world of Orthodox women, she found a richness in the all-female spheres they inhabited. In Crown Heights, where about 20,000 Chabad-Lubavitch live, there was Dalia G. Shusterman, 45, the drummer in an all-women band (who may perform only for female audiences); Devorah Benjamin, a wedding planner who pays for poor couples' weddings; and Neomi Schlifer, 34, a secular woman who chose Orthodoxy and runs women's support groups for the community.

The women, Ms. Pulwer said, "take things that can be seen as gender roles and make it something special. They are making it their own, making it into something they are proud of."

"There is a really interesting and beautiful tension between self-expression and following the rules," she said. "And finding yourself within this religious world."

Girls in the women's section during the celebration of the Jewish holiday Lag BaOmer.
Sara Blau, 29, is a mother of four who works at Beth Rivkah, a local girl's school, as a special-programs manager. She has written 19 children's books. Navigating a strict interpretation of Judaism and the encroachment of the outside world can be challenging, particularly with the intrusion of social media and technology. Girls at her school use smartphones, but they are equipped with filters for the internet.

"We use modern technology to spread God's awareness," Ms. Blau told Ms. Pulwer in an interview. "We're not looking to hide and be sheltered. We're looking to take what we have and go out and inspire the world.

When she was 21, Anat Hazan told Ms. Pulwer, she shaved her "mischievous light brown curls" in accordance with the religious precept that a married woman's hair should be only for her husband. While some women chose merely to cover their hair with a cloth or sheitel, or wig, the most zealous shave their heads beneath to ensure that their hair is never seen by others.

"There is a certain energy to the hair, and after you get married it can hurt you instead of benefiting you," said Ms. Hazan, now 49. She has published a booklet, "The Sheitel Advantage," which has since made her a sought-out authority on the subject.

Backstage during a school play in a girls-only Jewish Orthodox school.
"It takes a lot of self-acceptance for a girl to cover her head with a wig," Ms. Hazan said. "It's an act that has a very deep meaning beyond its physical expression — and it's not only for modesty reasons, since in many times the wig is more beautiful than a woman's hair."

Devorah Benjamin was born in England and moved to Crown Heights when she was 19. She shared with Ms. Pulwer her personal mission of the last three decades: throwing weddings for poor or parentless couples via the organization she founded, Keren Simchas Chosson V'Kallah, or the Fund to Bring Joy to the Groom and Bride.

"I hear from people who are not Orthodox or not Jewish that ask why we need an organization for weddings. 'Let them go to the courthouse and get married,'" said Ms. Benjamin, who pays for most of the weddings herself. "Tradition is very important. It is tradition to have a wedding. It is tradition that people come and dance," she said. "It's the foundation, a new family, a new generation coming."

To Ms. Benjamin, the highly circumscribed spheres separating the sexes are comfortable. "I have my role, and they have their roles, and we need that in life," she said. "It doesn't make me feel like I'm less."

Sarah Maslin Nir covers breaking news for the Metro section. She was a Pulitzer Prize finalist for her series "Unvarnished," an investigation into New York City's nail salon industry that documented the exploitative labor practices and health issues manicurists face.