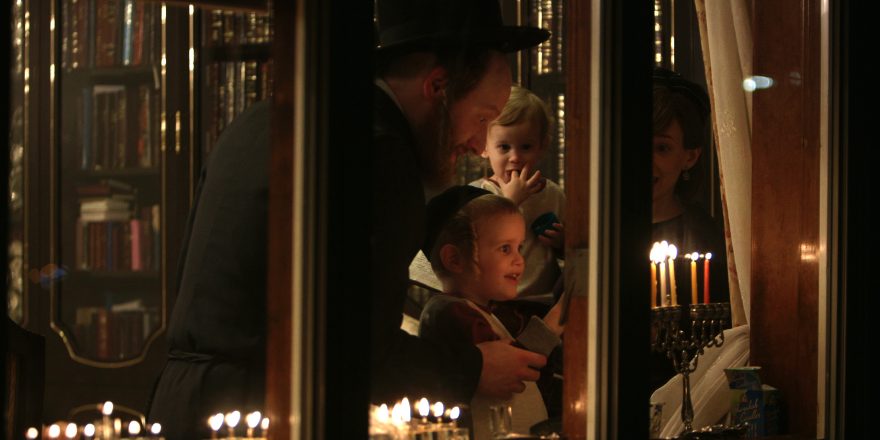 If you are a fan of movies featuring Hasidic characters, over the past two years your cup runneth over. Menashe. One of Us. 93Queen. They respectively tell the stories of a widower fighting for the custody and respect of his son, a group of individuals trying to escape of their restrictive culture, and Hasidic women creating the first all-female volunteer ambulance service. Like many New York trends, part of this mini boom is being driven by real estate. Hasidim and creative types have been eyeing the same properties – first in Williamsburg, then Crown Heights and Borough Park. They are becoming neighbors, which naturally begets curiosity, and Kickstarter campaigns are never far behind.

I’m the maker of another film about Hasidim – the upcoming documentary City of Joel, which captures an American Jewish identity that is increasingly fracturing and diversifying.

When I was growing up in Western Massachusetts in the 1980s, I understood Judaism to be a monolith. We were the descendants of the Holocaust and other violent anti-semitic spasms around the world that sent our families searching for a place to practice religion without a looming existential threat. There were clearly different flavors of Judaism – orthodox and secular, sephardic and ashkenazi, socialist and capitalist, even self-hating Jews who were at war with themselves – but there was a genuine sense that we were in this thing (Judaism) together. Now, though, the big-tent identity of Judaism seems to be coming apart at the seams, with Judaism following a trend in polarization that has become our new national pastime. As the horrors of the Holocaust recede into memory, as well the 20th century immigrant experience, their unifying power is diminishing.

A decade ago, I moved to Crown Heights – the spiritual center of the Lubavitch community – and I realized how little common ground I shared with my neighbors. I didn’t understand their politics, history or rituals. Perhaps the most jarring discovery was when I walked into my neighborhood synagogue to look into attending Rosh Hashanah services and learned that they still segregate the congregation by gender, with a woman’s section in the balcony. This was my entree into an identity politics that seemed antithetical to 21st-century norms of equality, to put it mildly. Most Hasidic women shave their heads based on their menstrual cycle. They won’t shake a man’s hand. And they’re not supposed show their elbows in public.

Being a dyed-in-the-wool believer in the humanistic power of film, I set out to make a documentary that could help me understand my neighbors. My initial idea: a film called Future Jew that would follow individuals who were going “off the derech” – leaving their community. Their stories would reveal the gulf between Jewish communities through their eyes. As I met people making this transition, I performed the requisite pre-production psychoanalysis and asked myself: Why am I making this film? What story do I need to tell? I realized that I was less interested in Hasidim who left – because that seemed like the decision I would make in their place – than in the people who stayed.

So I wanted to go to the white-hot center of the most insular and orthodox Hasidic community and try to understand them. That led me 60 miles north of New York City to Kiryas Joel, home to 25,000 members of the Satmar sect. I wanted to make a Wiseman-esque year-in-the-life documentary chronicling the rhythms and rituals of this village. Five years later, I’m finally wrapping up the project, with a planned festival run this fall. Documentary-ing can take a while.

One of the big obstacles was access. The Satmar are weary of both cameras and popular culture. My pitch was two-fold. First, they were involved in a small-town political brawl about land rights, and they were often caricatured in the media. I offered a chance to tell their story in their words. Second, my motivation was that I was a Reform Jew who sincerely wanted to understand their culture. On some level, a number of Satmar understood the chasms between different groups and saw the virtue in building empathy. I’m thankful for the generosity of every person who agreed to go on camera. Each of them taught me something new about their faith, community and individual lives.

One profound lesson was that even within a community as homogenous as Kiryas Joel, there is a wide range of experiences. While there is a uniformity to their public faces, private life is another story. For all the leadership’s warnings against the evil of the internet, I’ve received a lot of Facebook friend requests from Satmar I have met. They love, hate, gossip and break the rules, just like anyone else. I’ve met Hasidim who play on a flag football team. There are plumbers and Uber drivers. Women entrepreneurs and rabbis who have lost faith. And within this tightly bound community, there are warring factions – at least three subgroups each claim to be the true heir to Satmar faith. In a fittingly Biblical turn, the groups take the names of two brothers, who are the two Grand Rebbes of the Satmar: the Aaronites (for Aaron Teitelbaum) and Zalmanites (for Zalman Teitelbaum). The Old Testament is alive and well in Kiryas Joel.

This community is held together in part by their faith, traditions and a weariness of outsiders. Upon learning I lived in Crown Heights, one Satmar rabbi joked, “The Lubavitch is such a beautiful religion. So beautiful.” Then he held up two barely separated fingers for the kicker: “And it’s this close to Judaism.”

It’s a joke that reveals an unsettling truth: the tendency to invalidate Jewish people who are not in your group. One Satmar man – a friend of mine – told me that Reform Jews are the most anti-semitic people he’s met because they take the prejudices and slurs that have been hurled at them and turn around and apply them to Hasidim. (He later apologized when he learned I fall into this category.) To be clear, Hasidic groups are also on the receiving end of a fair share of ignorance and disdain. A few of supposedly open-minded secular Jews whom I’ve told about my film have said it sounds fascinating because the Hasidim are “crazies” or “a cult.”

I see the recent spate of Hasidic films as rooted in these two trends: a splintering of the diaspora and a desire to find some understanding of the far end of this spectrum. Each film I mentioned at the top of this article uses its own unique lens to move past the well-worn 20th-century archetypes of Jewish American life and discover at the fraying, splintered cacophony of Jewish voices today.

My documentary City of Joel is ultimately a culture-clash film that examines the fault lines between this Hasidic community and their secular neighbors, reform Jews, their dissident members and their own factions. There are breakdowns and in-fights, alliances and dissonances.

As the Satmar graciously welcomed me into their lives, I learned to appreciate and empathize with aspects of their culture that I had found alien. I learned to understand their self-segregation, dedication to rituals and religious texts. There are many aspects of Kiryas Joel that I genuinely find beautiful: their love of family and charity. But there are still some things I can’t get past. Foremost is gender. I’ve had long discussions with Satmar men and strong-willed women who defend the treatment of women. But I still can’t see it as anything but placing them in a subservient role. On the flip side, there are details of my life that they view as a betrayal of Judaism. We could probably stop and start the list with the fact that my wife – and the mother of my three children – is not Jewish.

Making this film has made me realize we are at a crossroads. Can we find enough common ground to maintain the idea of capital J Judaism as a big catch-all group so we still hang together? Can we still be part of one group and find space to question each other without revoking one another’s Hebrew cards? Or are our values so divergent that we are becoming the “other” to our former brothers and sisters? For the sake of a rich, complicated, and morally engaged Jewish community, I hope for the former. But based on the Jew-on-Jew conflicts I’ve witnessed, I fear we’re on the path for the latter.