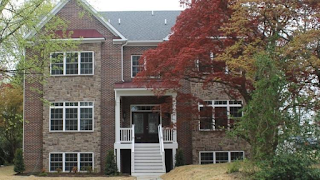 A student Jewish outreach organization in Towson has launched an online fundraising effort accompanied by a video, alleging a legal ruling ordering its building to be torn down is "discriminatory" – something the plaintiffs in the case deny.

Hasidic Jewish organization, Friends of Lubavitch, which runs the Jewish outreach program, Chabad, serving Towson-area college students, built the building addition in 2014 and has been locked in a legal battle with the community over zoning and land covenants ever since.

After a 2017 Circuit Court ruling to tear the structure down and a series of appeal decisions affirming that ruling, Chabad is taking the case public with a crowdfunding page on the website Charidy. A Change.org petition also has more than 7,000 signatures as of Nov. 27.

House or religious center? Debate over Chabad of Towson facility spans more than 4 years
"Eighty years after Kristallnacht, [a night in November 1938 during which German Nazis torched synagogues and vandalized Jewish homes, killing 100] a Rabbi's home and a home for thousands of Jewish students is slated for destruction," the organization said in a document attached to the fundraising page. "For a clearly discriminatory ruling like this to be administered in the 21st century is chilling."

Robin Zoll, next-door neighbor to Chabad and the lead plaintiff in the case, vehemently denied the allegation that the case had anything to do with discrimination, saying it is strictly a "land use issue."

"I've lived in this community for more than 50 years, and I have a very good reputation, and I am not an anti-Semite or an anti-anything," Zoll said. "It's an absolute besmirchment of everything that I am."

Comparing the case to Kristallnacht, she said, especially upset her.

Paul Hartman, a plaintiff in the case as part of the neighborhood umbrella group Towson Communities Alliance, also denied that the case has anything to do with religion.

"Something I told folks when we first started meeting: 'Imagine, whatever faith you are, imagine if it were your faith involved in this. What would your opinion be?'" Hartman said. "As far as I'm concerned, I would have the same opinion."

The case, Hartman said, is about the use of the land in Aigburth Manor, a quiet residential neighborhood adjacent Towson University. Chabad purchased a small house on the street in 2008 according to property records, and Rabbi Menachem Rivkin and his wife Sheiny Rivkin moved in.

Aigburth residents named as liaisons for Chabad of Towson project
Then in 2014, the Rivkins and Chabad received a permit to build a residential addition and built the current structure, a 6,614-square-foot building attached to the original 2,200-square-foot home.

Two separate legal issues with the property have snaked their way through the judicial system since the structure was built.

Firstly, a land covenant in the 1950 deed requires the building to be set back 115 feet from the road — the addition is less than 60 feet back. Circuit Court of Baltimore County, Judge Susan Souder ruled in April 2017 in favor of Zoll, saying the building violated the covenant. Judge Kathleen Cox, who took over the case after Souder retired, has upheld the order and worked with receiver Deborah Dopkin in enforcing it.

Secondly, the land is zoned for residential use. Neighbors alleged — and the Baltimore County Board of Appeals agreed — that Chabad built the addition under pretense of using it as a residence while actually planning to use it as a community center.

Aigburth Road project raises question: Is it a house or religious building?
The fundraising page calls the building a "religious hospitality center" and property records show the land is listed as a tax-exempt religious institution. But the Rivkins have maintained in court that the primary purpose for the addition was as a residence, to provide more space for their growing family of eight.

In a decision in the covenant case on Nov. 2, Cox ordered Chabad to deposit funds for razing the building into Dopkin's trust account within 45 days of receiving the final demolition cost estimate.

Also on Nov. 2, Cox denied a proposal to move the addition backward to comply with setback rules, saying that would "authorize the continuation of a commercial use that has been found to be non-compliant with restrictions on the property."

According to the fundraising page, the funds are being used to chart and implement the "best path forward," working with attorney Nathan Lewin, whose law firm website lists experience in arguing "religious liberty litigation" before the U.S. Supreme Court.

Paths forward, the page continues, include paying for a settlement with neighbors, paying to move the house if the court allows it, or paying the cost of destroying the building and rebuilding.

"In all scenarios, these funds will ensure there is a home away from home for the Jewish students of Towson University and Goucher College," the website says.

County Councilman David Marks, representing Towson, said he is trying to work with both the neighborhood and Chabad to come up with a solution, which could include relocating the center.

Raze Towson Chabad building – or move it backward? A judge will decide
"Some of the rhetoric has been misleading and unhelpful, and I hope it can be toned down all parties work together toward a positive outcome," Marks said.

Hunt Valley Baptist Church sued after the county's Board of Appeals ruled in 2016 against a request to build a 1,000-seat sanctuary, classrooms and gym on a 17-acre farm on Shawan Road. The church needed a special exception in order to build a church on a property with conservation zoning.

Baltimore County faces federal lawsuits alleging religious discrimination in zoning cases
ARIEL Russian Community Synagogue, which primarily serves Russian-speaking Jews, bought property in Pikesville to use as a synagogue and home for a rabbi, but the Board of Appeals ruled against the plan earlier this year.

At Jesus Christ is the Answer Ministries, pastor Lucy Ware sued after being denied variances to use a home in Milford Mill as a church. The case went to the Maryland Court of Special Appeals, where the church lost. The church filed a different plan, but was turned down again by the county. A federal judge dismissed Jesus Christ is the Answer's religious discrimination lawsuit, which now is on appeal.

And at Hunt Valley Presbyterian Church, officials sought to expand its facility on Beaver Dam Road by constructing a 67,1115-square foot building. The church's plan was approved, but the county Board of Appeals instituted restrictions, such as a requirement to notify neighbors of large events and to space out Sunday worship services. In its lawsuit, the church argues those restrictions "substantially burden" the church's ability to have free exercise of religion.

The county is considering hiring private attorneys to help defend the lawsuits. The county issued a request for proposals from law firms, due Nov. 2. An award of a contract usually takes 60 days after that.