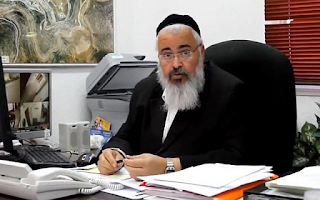 The former mayor of the ultra-Orthodox settlement Emmanuel in the northern West Bank admitted, as part of a plea bargain, to bribing local members of the Chabad Hasidic movement and illegally influencing the outcome of the 2013 municipal elections.

Ezra Gershi will serve six months of community service, pay a NIS 15,000 ($4,000) fine and will be convicted with moral turpitude, a designation that will prevent him from seeking public office in the future, according to the deal signed Tuesday. He will also be given a six-month suspended prison sentence.

Under the plea bargain, Gershi will admit that he violated local council law in the 2013 municipal elections, which he went on to win.

Gershi allegedly promised to employ Chabad members in paid positions in the local council, to fund the movement and provide benefits to top officials. He handed over a NIS 300,000 ($82,000) guarantee he would fulfill those commitments.

The former mayor was accused of allowing Chabad leaders in the town to convert a brand-new, publicly funded gymnasium into a private yeshiva in exchange for hundreds of votes from Chabad-affiliated residents.

According to the indictment, the mayor failed to disclose that agreement as legally required.

The State Prosecutor's Office handed down its indictment in August against Gershi, as well as an unnamed senior Chabad official who reached the secret deal with the then-mayor.

Despite the fact that the charges had already been filed against him, Gershi — who had served as mayor since 2008 — attempted to run for a third term in the municipal elections in October. He was said to have had a good chance of winning, but unexpectedly dropped out days before the vote, throwing his weight behind freshman politician Eliyahu Gafni, who agreed to make Gershi his deputy after securing a landslide victory.

Residents of the settlement, where roughly 3,000 people live, have suspected Gershi of abusing his position. There has been a video circulating over the past year in Emmanuel of what appears to be the mayor turning off the street lamps via a switch inside his house before going to bed ostensibly so that he can get a better night's rest.

In a statement responding to the plea agreement, the State Prosecutor's Office said it was willing to reach a compromise with the former mayor despite the serious charges against him, due to Gershi's willingness to cooperate throughout the investigation.

As part of the agreement, the former Emmanuel mayor also agreed to not take on the agreed-upon post of deputy mayor.

"It is a proportionate punishment that reflects the severity of Gershi's actions on one hand, and his taking of responsibility, the regret he expressed and his saving of the judicial system's time, on the other," the statement said.

Gershi's attorney, Sharon Nahari, asserted that his client's intentions were pure and that he was acting on behalf of the residents of Emmanuel.

"We are happy that the State Prosecutor's Office has accepted our arguments and is ready to close the case with only community service and a fine," Nahari said.