Tour guide gets rare approval to lead groups in Yiddish 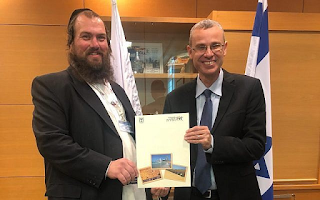 For the first time in many years, the Tourism Ministry has authorized a tour guide to conduct official tours in Yiddish.

Yechiel Charaz, 42, from the ultra-Orthodox city-settlement of Beitar Illit in the West Bank, is deputy CEO for a tourism company that works mainly with members of the Haredi community. As a licensed tour guide, he has for years been requesting permission to host guided tours in his mother tongue, Yiddish, which is the first language for many Hasidic Jews.

But for at the past six years, as ultra-Orthodox tourism to Israel grew by about 40 percent, the Tourism Ministry struggled to find a certified body that could test Charaz's proficiency in the language, the Yedioth Ahronoth daily reported Monday.

That problem was recently solved when a Tourism Ministry employee who studied Yiddish in university tested Charaz personally and decided his level was good enough to award him the coveted approval.

"This is part of a process aimed at advancing Haredi tourism and making the Tourism Ministry relevant for a huge community that until now was sidelined and is now getting the attention it deserves," Levin said. "Ultra-Orthodox tourism brought huge income to Israel in the past year."

Charaz said he works with groups of ultra-Orthodox tourists from abroad, including spiritual leaders and even members of the anti-Zionist Satmar sect.

"I tell them I am the biggest Zionist and make them love Israel," he said proudly during the ceremony. "I tell them this is the only place for Jews because it is ours."

Charaz, who said he has never traveled outside Israel, expressed hope that others would follow in his footsteps and seek to lead tours in Yiddish.