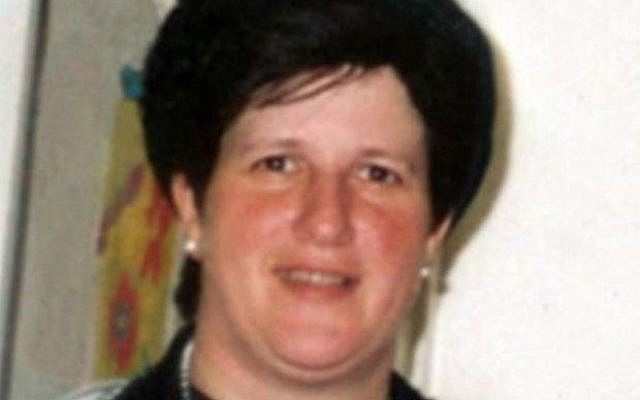 An ultra-Orthodox rabbi in Ashdod sent out an appeal to residents over the weekend, asking them to provide donations for the legal defense of alleged sexual predator Malka Leifer, who is currently in an Israeli prison, facing extradition.

The letter written by Yosef Direnfeld on Thursday was distributed in synagogues throughout the southern city, but carefully avoided identifying Leifer by name in addition to the accusations against the 51-year-old, who currently faces 74 charges of sex abuse in Australia, where she allegedly molested some 20 students while serving as principal of an ultra-Orthodox girls school in Melbourne.

“A personal and emotional request of all the generous people,” the letter begins. “An important woman, the daughter of the great and the righteous… has been imprisoned for a long time under harsh and cruel conditions… for the purpose of extraditing her to a gentile state.”

“In order to save her, we need specialized lawyers whose costs amount to large sums,” Direnfeld writes.

In a recording of a phone call obtained by the Kan public broadcaster, a resident of the town is heard asking the rabbi for additional details regarding the request. However, Direnfeld says he cannot speak about the matter over the phone and requests that the man meet with him personally.

The Times of Israel reached out to Direnfeld for an explanation, but he declined to comment.

The nature of the connection between the Ashdod rabbi — a Belz Hasid — and Leifer — a member of the Chust Hasidic sect — was unclear, but the fact that her case is reaching communities across the country suggests that the efforts to aid the suspected sexual predator are extensive.

One of Leifer’s accusers, Dassi Erlich, published the letter on Twitter, expressing her particular disgust with its opening phrase, “redeeming a captive” — an attempt by Direnfeld to define the suspect as someone whom Jews are obliged by Jewish law to rescue.

“I was taught about the Jewish law of ‘redeeming a captive’ during school years, never imagined it would be used to raise funds for my abuser,” Erlich wrote.

Leifer, an Israeli citizen, was secreted out of Australia to Israel in 2008, days before allegations of sexual abuse against her surfaced, in a plan orchestrated by officials at the Adass Israel school where she taught.

After authorities in Melbourne filed charges against her, Australia officially submitted an extradition request to Israel in 2012. Two years later, Leifer was arrested in Israel, but released to house arrest shortly thereafter. Judges deemed her mentally unfit to stand trial and eventually removed all restrictions against her, concluding that she was too ill to even leave her bed.

She was rearrested last February following a police undercover operation that cast doubts on her claims regarding her mental state, and has remained under custody since. The operation was launched after the Jewish Community Watch NGO hired private investigators who placed hidden cameras in the ultra-Orthodox Emmanuel settlement, where Leifer had been living, which showed the alleged sex abuser roaming around the town without any apparent difficulty.

On Thursday, the case — which has been closely followed by Australians, but has earned scant coverage in Hebrew media — saw what could be a major breakthrough.

After a months-long undercover operation, investigators from the police’s anti-corruption unit summoned Deputy Health Minister Yaakov Litzman for questioning on suspicions that he had sought to obtain a falsified psychiatric report that would have prevented Leifer’s extradition on medical grounds.

Leifer once taught at a school in Israel affiliated with the Gur Hasidic sect, of which Litzman is a member.

On Monday, a Jerusalem District Court judge rejected an appeal from Leifer’s defense attorneys for their client be released to house arrest for the remainder of extradition proceedings against her.

Yehuda Fried and Tal Gabbai, attorneys on behalf of the suspect, asserted that her detention over the past year has caused her mental state to deteriorate to the point where it is “life-threatening.”

Gabbai put forth a proposal that Leifer be released to house arrest in the home of one of two female Hasidic high school principals in Bnei Brak who would keep an eye on her. A prominent ultra-Orthodox figure in the central city, Rabbi Menachem Mendel Shafran, had given his blessing to the idea. The three were present at the courtroom on Monday.

Judge Ram Vinograd said he could not release her on medical grounds unless he received an updated psychiatric opinion regarding her condition. He recommended placing Leifer in a psychiatric institution where she could be evaluated prior to a follow-up hearing two weeks later, at which he would make his decision.

Both sides rejected the proposal, saying the process had dragged on long enough and that several district psychiatric reports had already been submitted on the matter — the most recent of which deemed Leifer mentally fit to remain behind bars and continue facing extradition hearings.

Fried told The Times of Israel that he planned to appeal the decision to the Supreme Court. However, such a move would not delay the extradition hearings against Leifer, which are slated for March 6, 13, and 24.