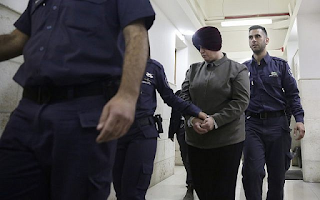 Two new allegation of sexual misconduct that took place in an Israeli school decades ago have surfaced against former principal Malka Leifer, who is facing extradition back to Australia over multiple charges of sex abuse at a Jewish girls school there.

The accusations, which occurred in the Tel Aviv suburb of Bnei Brak some 20 years ago, could indicate that ultra-Orthodox leaders, some of whom have allegedly continued to protect Leifer, sent her to Australia rather than report her to authorities, which activists claim is a common practice in the insular community.

The accusations are the first to be leveled against Leifer from before her time in Australia. She cannot face prosecution over them because the statute of limitations has expired

Up to this point, the allegations against Leifer have centered largely around her time in Melbourne where she served as principal of the Adass Israel ultra-Orthodox girls' school from 2000 to 2008. She is facing 74 counts of sexual misconduct charges there.

In July, a man living in the northern West Bank settlement Emmanuel, where Leifer lived after fleeing to Israel as allegations came to light, accused the woman of having tried to molest his daughter.

Leifer, currently jailed at the Neve Tirza women's prison in Ramle as she faces extradition, taught at an all-girls high school belonging to the Gur Hasidic sect in the central, ultra-Orthodox town of Bnei Brak in the late 1990s.

A former student at that seminary told the Kan public broadcaster Monday that Leifer would "cling" to her.

"She would take me for private conversation, one on one… down in the bomb-shelter. We would sit there and should would stroke my leg," the woman, who declined to disclose her identity said.

"She was crazy about me. She just kept stroking…back and forth on my skirt."

The alleged victim said Leifer once invited her to her home, but that she could not remember what had happened there.

"I remember running home…I tried to forget those years," she said.

The Times of Israel confirmed Monday that there is a second former student in Bnei Brak who accuses Leifer of having made inappropriate sexual advances at her nearly two decades ago.

An official from Jewish Community Watch, an NGO that combats child sex abuse, said that the woman is not yet prepared to go public with the allegations.

A former education official in Bnei Brak said she believed that rather than reporting her, community leaders sent Leifer to Australia after they learned of her transgressions.

The Orthodox community has come under scrutiny in the past for other cases in which teachers and others accused of inappropriate behavior were apparently moved to other communities rather than being reported to authorities and prosecuted.

Liefer had managed to postpone seeing a judge for years before 2018 by claiming she was unwell, sparking outrage among her former victims.

Responding to the latest allegations against their former principal, three of her alleged victims from Adass Israel said in a statement that they were "encouraged and heartened by the bravery of those finding their voices."

"Each new voice that rises above the fear of remaining silent is so valuable and important in helping to change the world into a better place. The more courage that we can bring out into the world, the more safer and just the world will become," said sisters Dassi Erlich, Ellie Sapper and Nicole Meyer.

In its own statement, JCW said that it's "inspired that in a community that has historically been so extremely insular, a dialogue about sexual abuse and assault is finally taking place."

"We are certain that no background noise will prevent the court from reaching the truth with the best professional tools available to it, and we reject any attempt by parties interested in influencing the court through false publications."

Leifer, an Israeli citizen, was secreted out of Australia to Israel in 2008, days before allegations of sexual abuse against her surfaced, in a plan orchestrated by officials at the Adass Israel school where she taught.

After authorities in Melbourne filed charges against her, Australia officially submitted an extradition request to Israel in 2012.

Judges deemed her mentally unfit to stand trial and eventually removed all restrictions against her, concluding that she was too ill to even leave her bed.

She was rearrested last February following a police undercover operation that cast doubts on her claims regarding her mental state, and has remained under custody since.

The operation was launched after JCW hired private investigators who placed hidden cameras in the ultra-Orthodox Emmanuel settlement, where Leifer had been living, which showed the alleged sex abuser roaming around the town without any apparent difficulty.

New suspicions against Litzman
Earlier this month, the case — which has been closely followed by Australians, but has earned scant coverage in Hebrew media — saw what could be a major breakthrough.

After a months-long undercover operation, investigators from the police's anti-corruption unit summoned Deputy Health Minister Yaakov Litzman for questioning on suspicions that he had pressured Jerusalem District Psychiatrist Jacob Charnes to submit a falsified psychiatric report that would have prevented Leifer's extradition on medical grounds.

Leifer once taught at a school in Israel affiliated with the Gur Hasidic sect, of which Litzman is a member.

On Monday, Channel 13 reported that police are investigating Litzman and his chief of staff Haim Justman on suspicions that they pressured another district psychiatrist named Moshe Briger to place an imprisoned sex offender on a fast track program for early release.

According to the report — which a legal official confirmed to The Times of Israel — Briger told police that after he initially refused Litzman's request, the deputy minister asked him to provide details on the other sex offenders that were slated to be placed on the fast-track program before the sex offender, who is a member of Litzman's Gur Hasidic sect.

Litzman's office flatly denied the report, as it has the other allegations made against the deputy minister. "Litzman does not exert pressure on anyone and is careful not to interfere with the professionals."

Last week, a Jerusalem District Court judge rejected an appeal from Leifer's defense attorneys for their client be released to house arrest for the remainder of extradition proceedings against her.

Fried told The Times of Israel at the time that he planned to appeal the decision to the Supreme Court. However, such a move would not delay the extradition hearings against Leifer, which are slated for March 6, 13, and 24.