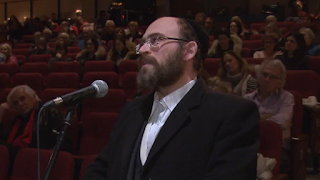 Outremont residents quarrelled at a tense meeting about a new synagogue on Bernard Street Wednesday night, hours after a resident filed a motion with the Superior Court to cancel the project.

Max Lieberman, a member of the Hasidic community, explained that the synagogue would be small and uncrowded.

"It will have a lot less impact, a lot less traffic. I would call it a dépanneur kind of synagogue," he said. "This is something that would serve a local resident who wants to go do their prayer service."

Frederic Fournier, who owns an ice cream shop on Bernard, said he's worried the synagogue will be bad for local businesses.

"We are worried about the parking," Fournier said. "It will be harder to find parking around our stores. And the noise."

Approval intended to avert legal battle
The borough moved to allow a new synagogue in a mixed commercial-residential building on Bernard earlier this year, despite a 2016 referendum that upheld a ban on new houses of worship on that street.

Borough Mayor Philipe Tomlinson has said that the ban happened too late to stop the plans for the building at 1260 Bernard Street, which is owned by a prominent member of Outremont's Hasidic community.

The borough still doesn't intend to allow new places of worship to be built on the street, Tomlinson said, but city lawyers advised Outremont that it would face a long and costly battle to try to fight the synagogue project.

There now appears to be a legal battle on a different front. Outremont resident Karim Ben Rhouma filed a motion in Quebec Superior Court Wednesday for the borough's decision to be cancelled.

"We will try to prove that the agreement was not based on the general interest or the risk of winning or losing in court," he said. "It was more based on a promise [Tomlinson] made to the Hasidic community about opening a synagogue."

Ben Rhouma, a real estate agent, claims to have the support of hundreds of residents. He said Tomlinson has not respected the referendum results.

"We're a bunch of citizens very unhappy about the situation," Ben Rhouma said. "The court filing is not against anybody. It's just a way to have our democratic rights respected."

Some who attended the meeting last night wanted to find out more. Mathieu Desaulniers-Robichaud has lived in Outremont his entire life, and said he wants to keep an open mind.

"There is a tension, but it's pretty much like anything in life: it's based on ignorance," he said.

"They're scared. And when you're scared, you talk about stuff, and you don't know what you're talking about sometimes."