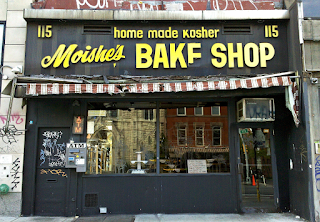 Moishe's, the beloved kosher bakery on 2nd Avenue, instantly recognizable by what the New York Times called its "stopped-in-time storefront," has served its last hamantaschen. Owner Moishe Perl told local photographers James and Karla Murray that yesterday was the bakery's last day, and that the entire building has been sold. In business since 1977, everything was baked on the premises daily. Moishe's challah bread, rye bread, hamantaschen, rugelach, babka and sugar kichel were legendary.

Hamantaschen was the signature item at the all-kosher establishment–no dairy except for the cheese danish and strudel, along with traditional poppy seed, as well as prune, apricot, raspberry, and chocolate for Purim. Perl guarded the secret cookie dough recipe. Also famous: Potatonik–a crunchy cross between kugel and potato bread. On Thursdays they emerged the oven and quickly disappeared.

Moishe Perlmutter was born to parents who met in a Nazi concentration camp. After surviving and coming to America after WWII, Moishe's father began working at a bakery on Suffolk Street in 1947. Moishe followed in his footsteps and bought a small bakery on Houston and Orchard Streets.

In 1972 he received an offer to buy a bakery at 115 Second Avenue since the owner of the 80-year-old establishment had died. Rents were affordable and the neighborhood was mostly Polish, Ukrainian, and Jewish, so he opened Moishes. Moishe retained his other location until at least the late '80s, but it was the East Village location that became famous

The business kept Orthodox traditions: Closed Saturday and shuttered at sundown on Friday. It was strictly cash only; even the bread slicer remained from when Moishe bought the place, though it "rattles like a gas-powered lawn mower" as he told the Times. Moishe is also a psychologist with a rabbinical degree in counseling. In his spare time he does family counseling for the Hasidic community free of charge.