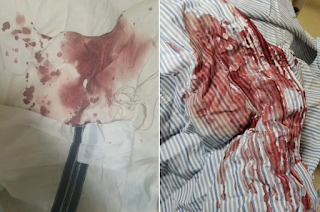 Police have collared a 26-year-old man in connection with an assault of a rabbi in a Crown Heights park, cops said Thursday.
Oneil Gilbourne allegedly smacked the 64-year-old in the face with a paving stone, knocking out his teeth, while the rabbi was on his morning stroll through Lincoln Terrace Park on Aug. 27, according to police.
Gilbourne was in the hospital for evaluation and charges were still pending against him Thursday afternoon, cops said.
The encounter started just after 7:40 p.m. when Rabbi Avraham Gopin, father-in-law of popular Hasidic singer Benny Friedman, said Gilbourne hurled a rock in his direction, cops said.
When Gopin, who was wearing a yarmulke, confronted the random man, the man punched him in the face, according to police.
The two struggled until, at one point, Gilbourne took a paving stone and hit Gopin in the face, cops said.
The assault is still being investigated as a possible hate crime.
https://nypost.com/2019/09/12/cops-arrest-man-who-bashed-crown-heights-rabbi-with-giant-rock/
Leave Comment ---This article posted by Chaptzem : 3:53 PM