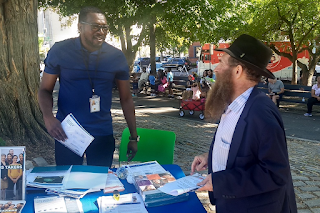 At the end of August, the New York Police Department Hate Crimes Task Force investigated an alleged anti-Semitic attack near Brower Park in the Crown Heights neighborhood of Brooklyn.
Someone had allegedly thrown a block of ice at a Hasidic man driving a car. It was the second allegedly anti-Semitic attack that week, coming days after an assailant had bashed a Hasidic man's head with a brick.

Two weeks later, at the same park, the famously fraught neighborhood projected a much different image: one of a diverse and peaceful community.

At a community festival on Sunday, a popular Orthodox Jewish children's singer shared the stage with a Caribbean dance group on stilts. Jewish and African-American children played together on a closed-off street. And inside a tent behind the stage, attendees sat in a circle and discussed contentious issues like hate crimes and gun violence.

This was the fourth annual #OneCrownHeights festival, but it felt especially relevant this year following a string of attacks on Orthodox Jews in Brooklyn that has heightened tensions in the area.
Crown Heights, a majority African-American neighborhood with a sizable Hasidic Jewish community and a growing population of hipsters, was the site of some of those attacks.

The violence has sparked painful memories of the 1991 riots there, which began when a black boy was killed accidentally by a car escorting Menachem Mendel Schneerson, the late head of the Chabad-Lubavitch Hasidic movement headquartered in the neighborhood. The death touched off three days of rioting in which black youths attacked religious Jews, killing one.