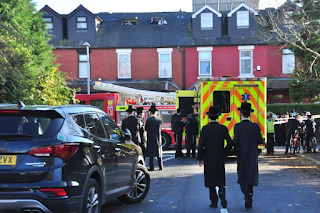 Five children have been taken to hospital after a house in Salford was engulfed by flames.

Several fire crews were called to the blaze on Wellington Street East, in the heart of the Hasidic Jewish Community, shortly after 1.40pm on Sunday afternoon.

Three children had to be rescued from the burning house by firefighters.

A woman and two other children managed to escape before fire crews arrived.

All six of them have been taken to hospital by North West Ambulance Service for precautionary checks.

They are not thought to be seriously injured.

It is believed the fire broke out in the kitchen of the property accidentally, or as the result of an electrical fault.

Station Manager for Manchester Fire Service, Mike Branney said: "Our crews were met with a well-developed fire in the ground floor kitchen.

"While wearing breathing apparatus they worked both to tackle the flames and lead three children to safety who were still in the house.

"The children were taken to hospital by NWAS, thankfully it looks like they only need precautionary checks.

"Firefighters worked tirelessly to prevent the spread of fire and managed to contain it quickly."

SM Branney added: "We believe the cause of the fire started from an overloaded plug socket that had overheated.

"It is imperative not to overload sockets, and to try and keep to one plug per socket."