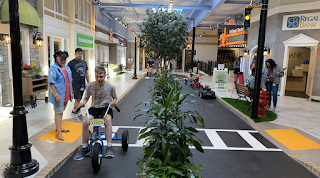 A new 11,000-square-foot shopping center here is home to 15 storefronts, including a bank, pet shop and clothing store. There's a health center with a dentist and doctor's office and a ShopRite supermarket.

A traffic guard monitors the crosswalk, which is bisected by a plant and tree-lined strip. After a day of errands, visitors can treat themselves to a manicure at the local spa or a performance at the theater.

"It's awesome," said Bailey, a 17-year-old student who was having her nails painted sky blue at the nail salon.

Bailey has autism, and the shopping center, known as LifeTown Shoppes, is designed to help children and young adults like her practice doing everyday errands. Upon arrival, visitors withdraw $12 from the bank and then decide how to spend it, whether on snacks, theater tickets or a manicure. They get around on foot or with tricycles, but they have to obey traffic signals or risk getting a ticket. Volunteers staff the shops.

The shopping center is the most innovative part of a larger complex created by Rabbi Zalman and Toba Grossbaum, emissaries of the Chabad Hasidic movement who established the center to expand their work with special needs children beyond the Jewish community.

"We realized that there was a need in our community," said Zalman Grossbaum, the CEO of LifeTown, the 53,000-square-foot facility that includes LifeShoppes.

The Grossbaums have lived in Livingston, an affluent North Jersey suburb of nearly 30,000 residents with a large Jewish population, for 23 years. Like most Chabad emissaries, they initially spent much of their time hosting Shabbat meals and Jewish learning programs in an effort to engage Jews from a range of religious backgrounds.

But the couple quickly found themselves catering to a number of special needs individuals. New Jersey has the highest rate of autism in the country, according to the Center for Disease Control. One out of every 34 8-year-olds is diagnosed with the developmental disorder, which is associated with difficulties with social skills and communication.

In 2000, the couple started a local branch of the Friendship Circle, an international Chabad initiative that runs programs for special needs children. But that effort was aimed solely at Jewish children.

"One of the things we've always felt bad about is turning down other families," Grossbaum said. "We couldn't respond to them because we didn't have the means by which to respond to them, so we always felt that we needed to do something to be inclusive of the entire community."