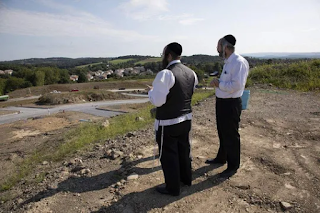 The state attorney general on Thursday filed a motion supporting a Chester developer's federal lawsuit alleging discrimination by the Town of Chester and Orange County.
Attorney General Letitia James' motion to intervene in the Greens at Chester's July 19 lawsuit comes 10 days after Gov. Andrew Cuomo cited ongoing tension between the town and Hasidim as a reason why he vetoed a bill that would help preserve land use in the town.
"Blocking the construction of homes to prevent a religious group from living in a community is flat out discriminatory," James said in a statement announcing the motion. "This campaign to deny housing to members of the Jewish community is not only a clear violation of our laws, but is antithetical to our basic values and blatantly anti-Semitic. New York has a longstanding commitment to ensure equal housing opportunities for all residents – regardless of race, gender, or religious identity – and we will ensure this commitment is upheld."
In her motion, James included a timeline of events related to the Greens at Chester lawsuit, and explains her reason to intervene: "The NYAG seeks to intervene in this action because of Defendants' obstruction of development of The Greens, and their policy or practice of preventing Hasidic families from purchasing and occupying those homes, all in violation of the FHA."
Developers of The Greens at Chester, a 431-home development being built on 117 acres off Conklingtown Road, filed a 101-page federal complaint on July 19 accusing Chester town officials, Orange County, and County Executive Steve Neuhaus of blocking its development in what attorneys argue is an attempt to prevent an influx of Hasidic residents.
James' motion, filed in U.S. Southern District Court of New York, names as defendants town Building Inspector James Farr; Supervisor Robert Valentine; Town Board members Cynthia Smith, Ryan Wensley, Orlando Perez, and Vincent Finizia; former Supervisor Alex Jamieson; Neuhaus, who is a former Chester supervisor; the town of Chester; and Orange County.
The attorney general's action sparked quick reaction from advocates of the Orthodox Jewish and ultra-Orthodox Jewish community, as well as from local officials.
"Finally, there is a sheriff in town committed to fight the blatant discrimination against Orthodox Jews occurring too often," said Rabbi David Niederman, president of the United Jewish Organizations of Williamsburg and North Brooklyn (UJO). "We commend Attorney General Letitia James for intervening in this case, to fight official actions to block this development in the Town of Chester."
"Today's action sends a powerful message that Orthodox Jews are also protected under the Fair Housing laws and discriminatory actions will not be tolerated," Niederman said.
Yossi Gestetner, co-founder of the Orthodox Jewish Public Affairs Council (OJPAC), released a statement via OJPAC's Twitter page:
"Rabble rousing on social media against a community with lies and innuendo as is done daily against Orthodox Jews is one thing. But taking official government action against a community is illegal," Gestetner's statement said. "Too often, local governments in New York and New Jersey abuse their powers in a bigoted attempt to deny Orthodox Jews their constitutional rights. Therefore, OJPAC welcomes when justice authorities intervene such as done today by the New York State Attorney General against Chester, Orange County."
A statement by Orange County Attorney Langdon Chapman, reiterated the county's claim that the Greens' lawsuit has no merit. Referring to the suit's charge that the county is hampering sewer and water permits, Chapman explained that the property does not lie within the county sewer district, and that it is the state and not the county that seeks further water testing.
"In short, the Attorney General has not identified a single permit being withheld by the County," Chapman's statement said. "Asking the state to do its job and review constituent concerns about water quality is perfectly reasonable. The state is apparently reviewing their state permit. ... Given the above, the Attorney General should re-visit their claims against the county."
Assemblyman Colin Schmitt, whose constituency includes the Town of Chester, decried James' action in a statement issued Thursday.
"This unprecedented intervention by the New York State Attorney General seeking to infringe on a local municipality's home rule authority is unacceptable," Schmitt said. "The Attorney General is not representing the citizens of Chester or Orange County by taking this extraordinary step. On the contrary, she is seeking to directly prevent the duly elected Chester town government from representing Chester residents who want to preserve the rural character of their community through longstanding zoning and planning laws.
"For years, the Attorney General's office stood silent as the illegal practice called blockbusting has impacted South Blooming Grove and other communities in the Hudson Valley. Instead of enforcing laws designed to protect homeowners, the Attorney General is now seeking to bring an action purportedly related to the Fair Housing Act that would benefit this one private developer."
The Village of Kiryas Joel lauded James's action.
"This is not the first time that elected officials in Orange County and the municipalities that surround us have engaged in discriminatory and exclusionary actions, with the sole purpose of preventing the growth of the Hasidic community," said Gedalye Szegedin, Kiryas Joel village administrator. "This pattern is part of a concerted effort to use laws, county permits and frivolous lawsuits to delay and deny Hasidic families from having quality and affordable housing. In fact, many elected officials have run on a platform that openly proclaims that they will fight Hasidic growth to protect this county from people of differing faith and lifestyles. That is both morally wrong and legally indefensible."
https://www.lohud.com/story/news/2019/12/06/chester-orange-developers-federal-lawsuit-alleged-discrimination/4352037002/
Leave Comment ---This article posted by Chaptzem : 10:09 AM