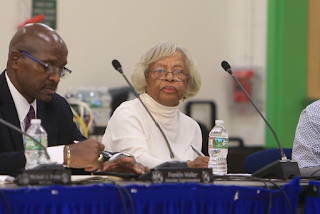 Jersey City Mayor Steve Fulop is calling on a school board member to resign after she called the Jewish community in the Greenville neighborhood "brutes" who have "threatened, intimidated and harassed" black homeowners.
Joan Terrell-Paige made the comments in a Facebook post responding to an online story about Jersey City fighting hate in the wake of the mass shooting last week. Two members of the city's growing Hasidic community, as well as a store employee and a Jersey City police detective were killed by an armed man and woman in what authorities are calling a hate crime.
"She should resign," Fulop said in a tweet. "That type of language has no place in our schools and no place amongst elected officials. Imagine she said this about any other community — what would the reaction be? The same standard should apply here."
Terrell-Paige, whose term ends Dec. 31, 2020, ended her commentary by saying she was speaking "as a private citizen, not as an elected member of the Board of Education." The Facebook post has since been deleted.
That mattered little to the mayor and school board president Sudhan Thomas.
"I saw this and I'm saddened by the ignorance her comments demonstrate," Fulop tweeted. "Her comments don't represent Jersey City or the sentiment in the community at all. The African American community in Greenville has been nothing short of amazing over the last week helping neighbors."
In a statement, Thomas said "Trustee Paige's comments do not reflect the JCBOE outlook or value system. The JCBOE is home to 30,000 students and 6,000 employees from various ethnicities, religions, cultures and sexual orientation. There is no room for any kind of hate or bigotry in Jersey City."
The commentary also accused members of the Hasidic community of waving "bags of money" in front of Ward F black homeowners to entice them to sell their properties. She went on to say that refusals to sell "were met by threats of 'we will bring drug dealers and prostitutes to live next door to you. You will sell to us then.' "
Terrell-Paige also claimed that black renters were evicted 30 days after homes were purchased by members of the Hasidic community "so that more Jewish people could move in."
In 2017, Jersey City passed a "no-knock" law, partly in response to complaints by some homeowners in the Greenville section and other areas of the city that they were being harassed by people wanting to purchase their homes.
Terrell-Paige's commentary also rails against Jersey City officials, apparently tying the arrival of the Hasidic community to the elimination of the "Friends of Lifers" and "Second Chance" programs. She added "Many of the community gardens tended to by black people were eliminated. One still exists and has been harassed almost daily."
https://www.nj.com/hudson/2019/12/mayor-calls-on-jersey-city-school-board-member-to-resign-over-comments-about-jewish-community.html
Leave Comment ---This article posted by Chaptzem : 9:40 AM