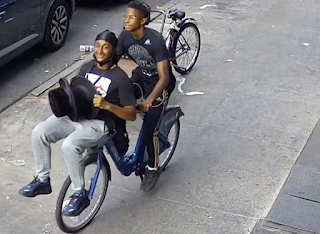 Police are searching for a pair of cycling suspects for an alleged string of anti-semitic thefts in northern Brooklyn over the summer — claiming the duo doubled up on a Citi Bike and went on a hat-snatching spree on July 23.
The pedal-pushing crooks began their misbehavior on Bedford Avenue near Clymer Street at 3:30 pm, when they snatched the cap of a 21-year old man in traditional Hasidic garb and biked off.
The pair struck again twice just minutes later further Bedford Avenue between Willoughby and Dekalb Avenues in Bedford-Stuyvesant, when they grabbed the hats off two other victims, aged 21 and 46.
At 5:34 pm, the thieves made one last larceny near Myrtle Avenue, when they swiped the headtop religious attire from a 48-year-old man.
In surveillance footage taken near the fourth incident, the duo can be seen grinning while riding a Citi Bike down the sidewalk and holding two hats.
No arrests have been made and the investigation is ongoing, according to police.
Citywide, the NYPD recorded 200 hate crime incidents from the beginning of 2021 until Sept. 29, when the most recent data is available — including 84 incidents with anti-semitic motives, according to police statistics.
https://www.brooklynpaper.com/cops-searching-for-cycling-hate-crime-duo/
Leave Comment ---This article posted by Chaptzem : 10:28 AM