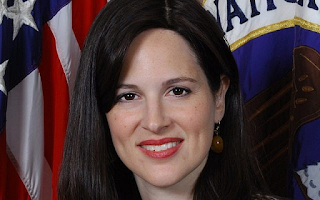 US President-elect Joe Biden has reportedly picked an Orthodox Jewish woman for a new cybersecurity position on the National Security Council.
Citing two people families with Biden's plans, Politico reported Wednesday that Anne Neuberger will be named deputy national security adviser for cybersecurity.
Neuberger, the head of the National Security Agency's cybersecurity division, will be tasked with coordinating cybersecurity for the US federal government, the report said.
A spokesperson for the Biden transition wouldn't confirm the pick but said cybersecurity would be a top priority for the incoming administration.
"We will strengthen our partnerships with the private sector, academia, and civil society; renew our commitment to international norms and engagement on cyber issues; and expand our investment in the infrastructure and people we need to effectively defend the nation against malicious cyber activity," the spokesperson said in a statement.
A congressional staffer hailed Neuberger as "one of the most capable and respected cyber experts" and said her selection for a White House role would be a "big loss" for the National Security Agency.
One of the most pressing tasks facing Neuberger will be addressing the massive, months-long cyberespionage campaign that has compromised dozens of US government agencies and private businesses. US officials have linked the hack to elite Russia hackers.
Neuberger has worked at the National Security Agency for over a decade and was tapped to lead its cybersecurity efforts last year. She helped establish the US Cyber Command and worked as chief risk officer, leading the agency's election security efforts for the 2018 midterms.
Neuberger has said her family's harrowing escapes — first from the Holocaust and then from the Entebbe hostage crisis in Uganda, after the Air France flight her parents were on was hijacked by Palestinian terrorists in 1976 — helped shape her worldview.
Though her parents are not Israeli, they were held by the hijackers for a week along with Israeli passengers because they were Jewish.
https://www.timesofisrael.com/biden-to-pick-orthodox-jewish-woman-for-white-house-cybersecurity-post-report/
Leave Comment ---This article posted by Chaptzem : 12:51 PM