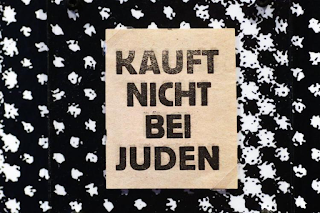 In this Tuesday, April 19, 2016 file photo a sticker from around 1900 reading: 'Don't buy from Jews' is displayed at an exhibition of antisemitic and racist stickers at the Deutsches Historisches Museum (German Historic Museum) in Berlin, Germany. Before local anti-Jewish laws were enacted, before neighborhood shops and synagogues were destroyed, and before Jews were forced into ghettos, cattle cars, and camps, words were used to stoke the fire of hate. 'ItStartedWithWords' is a digital, Holocaust education campaign posting weekly videos of survivors from across the world reflecting on those moments that led up to the Holocaust.
https://www.wdrb.com/dont-buy-from-jews-sticker/image_e58f50be-985f-11eb-85b1-3b3e61f8fcc2.html
Leave Comment ---This article posted by Chaptzem : 9:40 AM