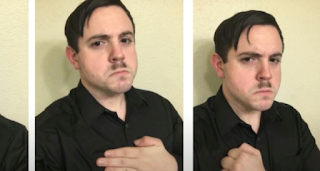 U.S. Justice Department prosecutors, in a court filing on Friday, said that a known Nazi sympathizer and army reservist who was arrested in connection to the January 6 Capitol insurrection should not be released while awaiting trial, because he poses a threat to the Jewish community of New Jersey.
CNN reported that Timothy Hale-Cusanelli — who worked at a naval base near Lakewood, New Jersey, which is home to a large Hasidic community — has been charged with seven felonies, including civil disorder, disorderly conduct, and obstructing congressional proceedings.
He has pleaded not guilty and denied to the FBI that he is a Nazi sympathizer. His lawyers claim that he is not a member of any white supremacist organization.
They have also claimed he cannot be a white supremacist because he is of Puerto Rican descent on his father's side.
Federal prosecutors disagree, and have asked that Hale-Cusanelli remain in jail, citing police reports of him harassing and "doxing," or publishing private information about, members of Lakewood's Jewish community.
"Defendant poses a more localized threat to the community," the prosecutors said in their court filing, "particularly the Hasidic community in Lakewood, New Jersey."
https://worldisraelnews.com/neo-nazi-capitol-rioter-is-a-threat-to-jewish-community-say-federal-prosecutors/
Leave Comment ---This article posted by Chaptzem : 2:31 PM